Our President, Pranab Mukherjee’s duration is going to end by this July 24, 2017. So, in need of next President, the election is going to be held on July 17, the votes will be counted after three days. The president will be chosen by the constitution members of our nation and by the state lawmakers.

By the Support of Prime Minister Narendra Modi, the BJP and it co-parties like TRS of Telangana were planned to win the election, if there any lack in a vote that has to be faced by the party. Then our PM is willing to select the candidates. The candidates who ready for nomination are cabinet ministers M Venkaiah Naidu, Sushma Swaraj, Thawar Chand Gehlot and Jharkhand Governor Draupadi Murmu. 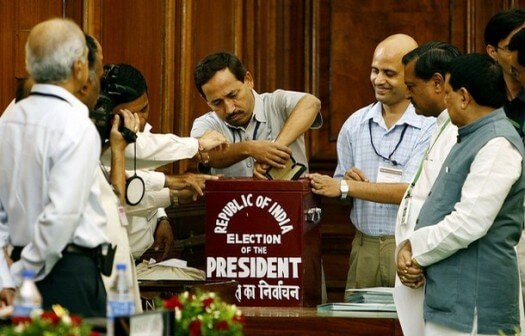 The president will be chosen by the constitution members of our nation and by the state lawmakers.

Last month, in a meeting, the BJP Chief Amit Shah said that the candidate will select after discussing with the party member, and also he said

“Consensus is a word that it is used in several ways. But we will hold discussions with everybody, including opposition parties,”

The important persons from BJP said that elections would show the strength of the party and he also indicated that Karnataka and Gujarat were important States for this election.

The opposition parties leaders Mamata Banerjee said that everybody should get satisfied on deciding the nominee otherwise this election is just an eyewash. The Congress Leader  Sonia Gandhi is heading the discussion with the opposition party leaders for selecting the candidates.

In between of this discussion, the other opposition leaders were foot back, and they are waiting to see that by this decision how the ruling party is going to get affected in the upcoming election.Till now there is no opposition from anybody if the government had select any person who is not suitable for this post at that the small party leaders like Sharad Pawar and Ghulam Nabi Azad will come for the decision of selecting the President.

The last leader Sitaram Yechury said that the opposite party is working for the Vice-President candidate.

He also added that, if we are working for the Vice President that we need to decide that and the political face is a favour to us.