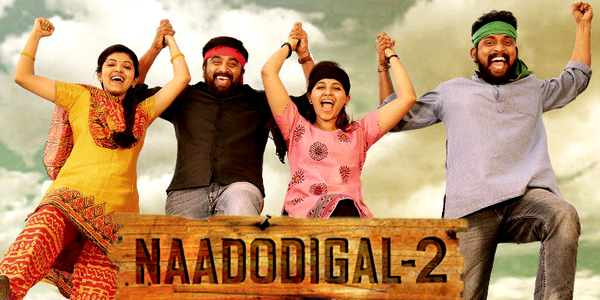 Naadodigal 2 is a rural drama features Sasikumar, Anjali, Athulya Ravi in the lead role. The movie was directed by Samuthirakani and produced by S Nandagopal. The music for the film was scored by Justin Prabhakaran who has composed music for some famous movies like Monster, Dear Comrade, Dharmaprabhu, Adutha Saattai and more.

Adhuva Adhuva is the first single of this movie. Lyricist Yugabharathi has written this song and it was sung by Sooraj Santhosh & Shweta Mohan.

The lyrical video of Varungaalam Engaladhu was released on Sept 20, 2019. The song shows the energetic celebration of friendship. G. Logan and Arivu penned this song and the song sung by G. Logan, Arivu, Gana Ulagam Dharini and Isaivani.

The song Paga Paga was penned by Yugabharathi and sung by Mark Thomas. The song is about the revenge taken in the film.

The official Tamil lyrical video of the song Aana Varudha Paarungadi was released on Sep 20, 2019. The song was written by Yugabharathi and it was sung by playback singer Reema.

As soon as the song gets released, the piracy website Tamilrockers will leak the pirated version of the album. Naadodigal 2 songs Download link will be made available for free download in many torrent websites. We advise our readers to download songs only from official sources like Amazon Music, Apple Music, Wynk Music, Gaana and Official YouTube Pages. Don’t support or use pirated websites like starmusiq, isaimini, to stream and download songs.