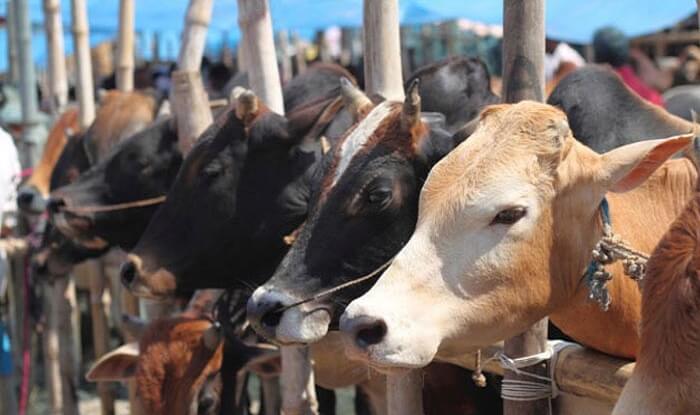 Narendra Modi’s controversial Cattle Trade Ban on sale and purchase of cows and buffaloes at animal markets for slaughter will face its hardest test when the Supreme Court hears its constitutional validity on Today. The order already triggered the widespread protests.

The Bench of the court involving of Justice Deepak Gupta and Justice R K Agarwal will examine the petition filed on Modi’s Cattle Trade rule by the Fahim Qureshi, Hyderabad-based lawyer and president of the All India Jamiatul Quresh Action Committee. He said the Modi’s Cattle Trade Ban is “Unconstitutional” and “Discriminatory” as it will stop the cattle traders from earning their livelihood.

Modi’s ban on Cattle Trade Rules is “Unconstitutional” and “Discriminatory.”

The decision will hit the poor Farmers and squeeze supplies to the India’s Rs 1 lakh-crore meat industry. The petition by Hyderabad lawyer will also challenge the Government of pushing the Beef ban through the back door in keeping the BJP’s Hindutva agenda.

As per the Law of Prevention of Cruelty to Animals issued by the Ministry of Environment, Forests and Climate Change in 2017, only farmland owners to trade at animal markets. The ban covers the trade on bulls, bullocks, cows, buffaloes, steers, heifers, calves, and camel. The buyers have to provide an undertaking that the animals are bought for agricultural purposes and not for slaughter.

The lawyer said, “Slaughtering of animals for food and sacrifice was part of the cultural identity of particular communities and was protected by law.” He further added that the restrictions placed by the new rules would breach the law of Prevention of Cruelty to Animals Act of 1960. The law further recognises the slaughter for food.

Section 11 of the act doesn’t categorise the slaughter of animals for food as cruelty.  It would make an explicit exemption for

“destruction of any animal as food for mankind unless such damage or preparation were accompanied by the infliction of unnecessary pain or suffering.”

Meanwhile, a PIL (public interest litigation) petition came up for hearing before Supreme Court ban’s animal sacrifices for religious purposes. The court had specifically noted how Section 28 of the Act commands that “nothing in the 1960 Act renders it an assault to kill any animal in a manner required by the religion of any society”, the petition pointed out.