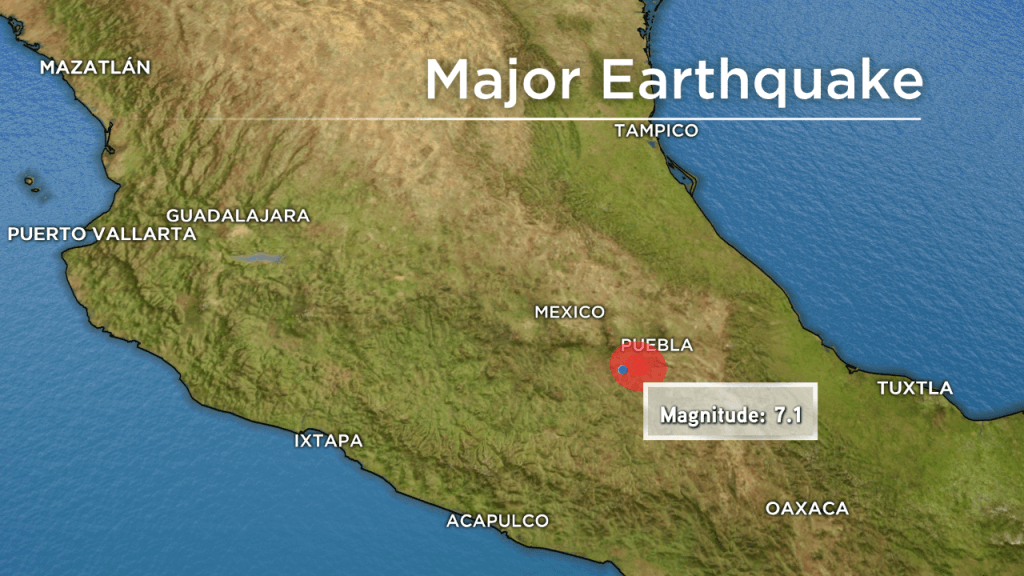 A powerful earthquake struck central Mexico on Monday that crumbles the buildings in the capital with plumes of dust and killed at least 149 people. Thousands of people fled into the streets in panic, and many stayed to help rescue those trapped. Dozens of buildings fell into mounds of rubble or were critically damaged in densely populated parts of Mexico City and also in nearby states. Mayor Miguel Angel Mancera said buildings tumbled at 44 places in the Mexico as high-rises across the city affected sickeningly. The death toll climbed throughout the night as rescue workers continued digging through rubble, with 21 children at a collapsed primary school among those reportedly killed. Mexico Earthquake threatened people throughout the city.

The 7.1 magnitude earthquake came on the anniversary of a devastating 1985 quake that caused major damage to Mexico City and struck as many people took part in an earthquake drill. This monster quake came less than two weeks after another powerful Earthquake killed 90 people in the country’s south. The US Geological Survey reports that the epicentre was Atencingo in Puebla state town of Raboso at 1.14pm local time, around 75 miles south-east of Mexico City, and hit at a depth of 32 miles.

Miguel Angel Osorio Chong, the federal interior minister, instructed authorities to have a report of people possibly still being trapped in collapsed buildings and also he told that search efforts were slow because of the frangibleness of rubble.

“It has to be done very carefully,” he said. And “time is against us.”

The Mexican Earthquake sent people throughout the city leaving from homes and offices, and many people waited in the streets for hours, afraid of returning to the particular places. Alarms sounded, and traffic stopped around the Angel of Independence monument on the iconic Reforma Avenue. Electricity and cell phone service were interrupted in many areas, and traffic was threatened as signal lights went dark.

Donald Trump, the US president, tweeted as

“God bless the people of Mexico City. We are with you and will be there for you.”

Power was cut to 3.8 million customers, the national electricity company, CFE, said and mobile phone signals were down across large parts of the country. Mexico City’s international airport discontinued operations and was inspecting facilities for any damage. Mexican stocks and the peso currency dropped on news of the earthquake, and Mexico’s stock exchange suspended trading.

Read also God of Earth | In Religions Around the World

Paul Earle, a US Geological Survey seismologist, told that Mexico City is built on the former lake bed, and the soil can elaborate the effects of earthquakes centred hundreds of miles away. In the past century, 19 earthquakes caused with magnitude 6.3 or larger within 200 miles of yesterday’s quake.