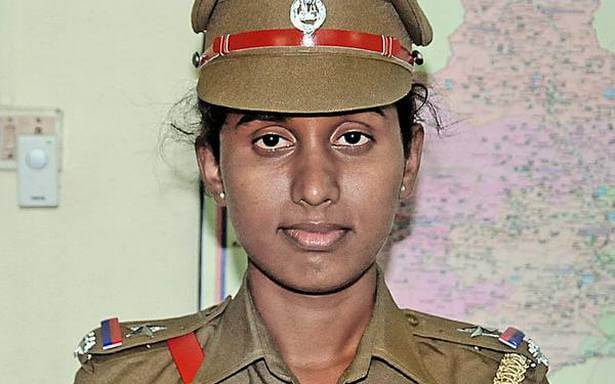 India’s First Transgender Cop: K. Prithika Yasini is India’s first transgender who has created a record by joining the Tamil Nadu Police Force as trainee sub-inspector, to achieve this distinction in the country. Her childhood dream to don the Khaki uniform was finally fulfilled.

The Commissioner of Police Sumit Sharan had issued the appointment order to Prithika Yasini and other 21 to join the TamilNadu police force as sub-inspectors in Salem city.

She has been posted to Dharmapuri district after the completion of one-year intensive training at Choolaimedu police station, Chennai and reported for duty on Monday at 5:00 pm.

In 2015, Prithika had applied to be an SI after the TNUSRB invited applications to fill 1,087 SI posts. But she was rejected on gender categories. She struggled it out in the Madras High Court and was then allowed to attend all her test and take part in the physical tests as well.

A Madras High Court Bench had ordered to include members of the transgender community under ‘third category’ in Tamil Nadu Uniformed Services Recruitment Board, which is in-charge of selecting the employees for the state police force.

Prithika Yashini told that she is very eager to serve the country and help the public and also she has plans to write the civil exam to become an IPS officer.

“I have struggled for this opportunity be it in the court or with the police department,”

She was succeded among the 1,028 news SI recruits who have selected into the Tamil Nadu Police Force after completion of training for a year a week ago.

Kamal Haasan’s Political Entry | Will You Support him on this New Avatar?