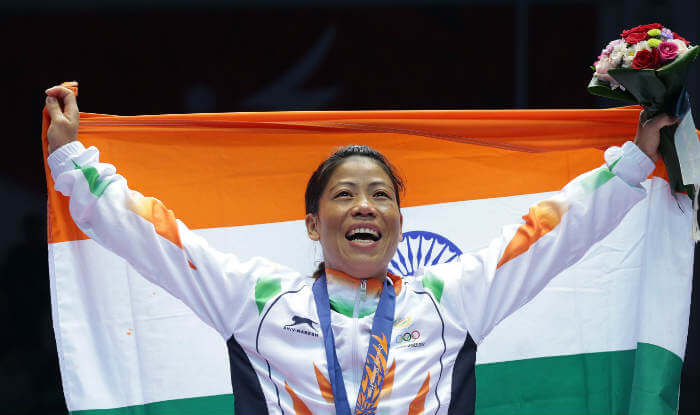 Mary Kom was born on 1 March 1983 in Kangathei, Manipur, India. Mary Kom family is now residing in Kangathei, Manipur, India. Her father name is Mangte Tonpa Kom and her mother name is Mangte Akham Kom and her parents were tenant farmers worked in jhum fields. She has two siblings, a brother and a sister. She did her schooling in Loktak Christian Model High School (Up to VI), St. Xavier Catholic School, Moirang, (Up to class VIII) and Adimjati High School, Imphal (class IX and X). She finished her graduation in Churachandpur College, Manipur. Her father was a keen wrestler during his younger days. While studying class VIII, she was interested in athletics, especially on the javelin and 400 meters running. She was unable to pass her Xth Matriculation exam, so she quit studying. Later, she wrote an exam to join in NIOS, Imphal. In that sports school, she has participated in all types of sports like volleyball, football and athletics.

In the year 2000, Mary Kom switched from athletics to boxing and got trained under K. Kosana Meitei, who was her first coach. After that, she got trained under Manipur State Boxing Coach M. Narjit Singh at Khuman Lampak, Imphal. After three years, she married Karong Onkholer Kom on March 2005. The couple has three children namely Khupneivar Kom, Rechungvar Kom and Prince Chungthanglen Kom. After marriage, she took a short break from boxing and started her training after giving birth to two children. In 2008 Asian Women’s Boxing Championship in India, she won the silver medal and a fourth successive gold medal at the AIBA Women’s World Boxing Championship held at China. Following the success, she again won the gold medal at the 2009 Asian Indoor Games in Vietnam.

In the year 2014, Mary Kom won the first Gold Medal at the Asian Games held at Incheon, South Korea by defeating Kazakhstan’s Zhaina Shekerbekova in the flyweight of 51 kg summit clash. In 2017, she grabbed her fifth gold medal on 48 Kg at ASBC Asian Confederation women’s boxing championships in Ho Chi Minh in Vietnam. In the year 2018, Mary Kom became the first women to win 6 World Championships. She achieved this at the 10th AIBA Women’s World Boxing Championships held in New Delhi. She usually fought in 46 and 48 kg categories, later she shifted to 51 kg category because the world body decided to allow women’s boxing in only three weight categories and eliminating the lower weight classes.

In 2012 AIBA Women’s World Boxing Championship, Mary Kom not only fought for the championship but for her place at the 2012 Summer Olympics in London. It is the first time women’s boxing had become an Olympic sport. In that, she was defeated by Nicola Adams at 51 kg semi-finals. In that match, she grabbed the bronze medal being the only Indian women qualified for the boxing event. In the 2012 Summer Olympics, once again she won the bronze medal. In the year 2016, Mary Kom was keen on representing India at the 2016 Rio Olympics but she was not able to qualify for the event. She is continuing her training for the same to appear in the 2020 Tokyo Olympics.