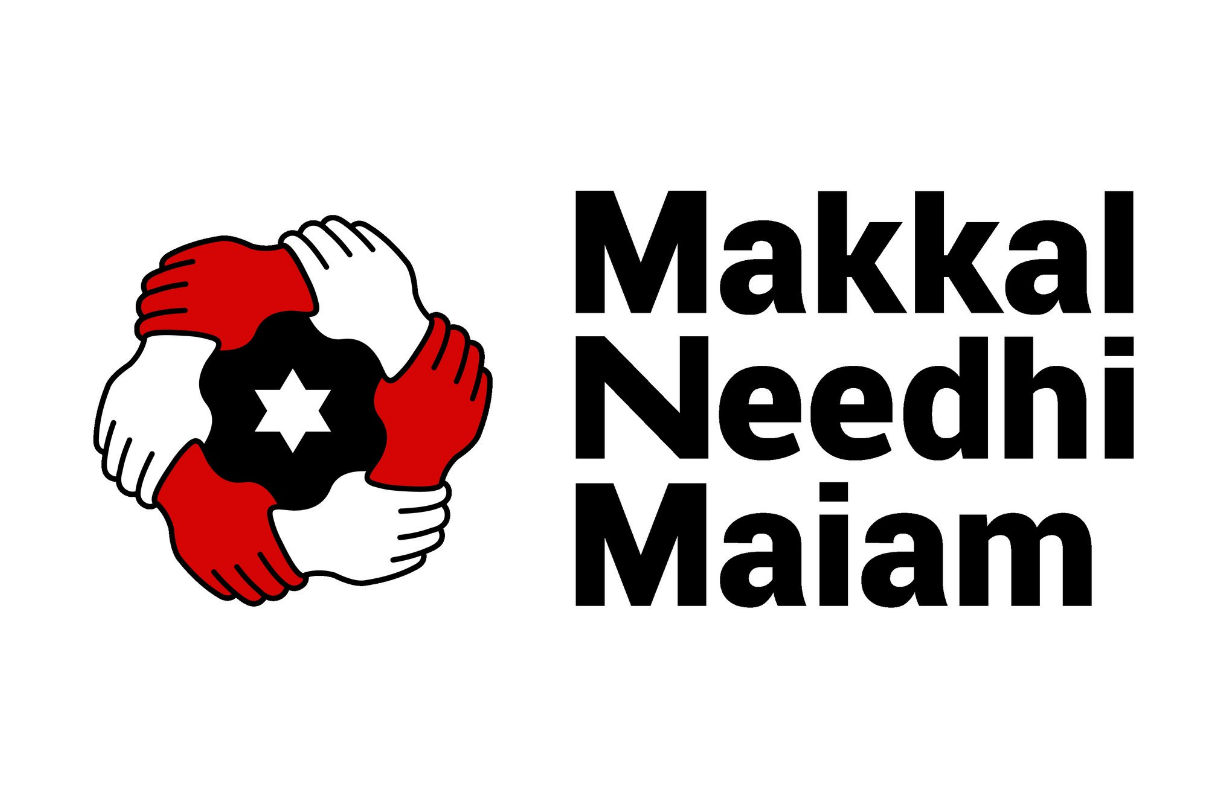 Actor Kamal Hassan announces his party name which is most awaited by the people of Tamil Nadu, especially by his fans. Named as “Makkal Neethi Maiam” Kamal called his party’s name thrice after hoisting the party’s flag near the stage in Madurai along with Arvind Kejriwal, the Cheif Minister of Delhi.

On Wednesday, the Actor turned politician visited Tamil Nadu’s Rameswaram and paid tributes to the late President APJ Abdul Kalam. Haasan made short speeches in a few places including in his native place, Paramakudi. In Ramanathapuram, the actor said, “I am no more a cinema star. From now on, I will be a lamp at your home.”

Delhi Chief Minister Arvind Kejriwal made his presence at the stage with Kamal Haasan while Kerala Chief Minister Pinarayi Vijayan has sent a video message, which played on the screens at the event. He congratulates and welcomed the actor into politics.

The Makkal Needhi Maiam’s flag has three colors such as red, black and white. Mr. Haasan explained the emblem on the flag as it is the map of a new South India. The six hands are the six states in South India. The star in the centre represents the people. The people are the stars. The 63-year-old actor promised that he will take the goodness from all sides and he doesn’t have the idea of ruling for the next 40 years. He is just searching for a leader in this group and sowing the seed for a change. Official twitter page of party Makkal Needhi Maiam

The actor plans a state-wide tour and has said he will adopt a village in every district, with development and fighting corruption as his main agenda. Kamal Haasan, in a tweet, welcomed people to attend his party launch to “create a new era”.

At around 7:30 pm,  Kamal Haasan addresses a huge rally in Madurai to launch his political party.

Kamal loudly announces his party name as Makkal Needhi Maiam. He called his party’s name thrice after hoisting the party’s flag near the stage in Madurai along with Arvind Kejriwal, the Cheif Minister of Delhi.

Haasan said that You must be an example of the present-day political system and I will be seeking your suggestion rather than giving you speeches.

According to TV reports, Haasan says he is like a grain of rice boiled from the heart of Tamil people,

“I am not your leader, I am your tool.. this gathering is full of leaders,”

Kamal Haasan hugs all members invited on the stage for felicitation of the party.

The presenter says Kamal Haasan has requested no shawls or bouquets should be given to him on the stage. Instead, donate to the needy.

There was interference when I started doing good things… we have been doing our job. We will bring out the corruption in the government.

“People ask about my ideology, here it is — good quality education must reach all, caste and religious games played on us must be stopped. Corruption has to be eradicated,” says Haasan.

“I don’t have money to give voters. I will spend it on welfare.”

If the party is doing something wrong, please tell us. We will listen: Haasan

I’m not here to run the state for next 40 years. I’m here to search for the future generation that will lead the state: Haasan

The actor announces his party has been registered with the Election Commission.

Here onwards when I speak, I will take questions from the public. If I don’t know the answers, I will write a letter and respond to them: Haasan

Hinting at late Tamil Nadu CM J Jayalalithaa, Haasan says no chief minister is life-long. “The battle will be handed over to the next runner,” he says, adding that he will take care of Tamil people till he is here.

We have created a structure that will take the party forward for at least 3-4 generations, he says.

How can I eradicate corruption alone? We have to join hands to finish corruption: Haasan

Kamal Haasan says the Tamil language will grow if we read, speak and write. “It doesn’t mean you hate other languages.”

I just wanted to meet Kalam’s family, which is in Rameshwaram: Haasan explains why he visited former president APJ Abdul Kalam’s residence earlier on Wednesday.

It’s for my daughters to decide if they want to join politics. It’s up to them: Haasan answers question about his 2 daughters joining politics.

According to media reports, Delhi CM Kejriwal said Kamal Haasan’s party will be a great political alternative in Tamil Nadu and that the actor is now a “real life hero”. Also added, There is no dearth of money in the government. There is the only dearth of intention. If you have an honest government, anything is possible

“People of Tamil Nadu are ready to throw out DMK and AIADMK, and bring Kamal Haasan to power.”

Kejriwal concludes his speech by wishing Haasan luck in his political journey and said that the people of Delhi started this trend to vote for new, honest political parties. Now it’s the chance of Tamil Nadu to break Delhi’s record.

“If you want schools, hospitals, roads, and electricity; If you want an honest government, vote for Kamal Haasan!”

“Different governments have made different promises and then when people ask why the promises are not met, they bring different problems in front of them,”

“I will be there, will support the community. There is a need to rediscuss international treaties. Your questions cannot be answered with violence,”

A Tweet Activist Prashant Bhushan who is also a co-founder of Swaraj Abhiyan wished Hassan,

All the best to Kamal Haasan, who has finally taken the plunge into Tamil Nadu politics. No doubt he is doing it with the intention of improving public life in the state, which desperately needs something far better than what DMK, ADMK, Congress, and BJP have to offer. He will need expert advice on policy.

Kamal Haasan addresses the media along with fishermen as

“Thank you for coming here and encouraging me. My best friends (people from the fishermen community) are here on stage with me. I will come back and with all of you, one-on-one. I didn’t come here to ask them to join me, I want to join them,”

A fishermen community leader’s speech at the press meet in Rameswaram,

“Kamal is an actor par excellence. He has now taken our problems into his hands. The Centre is not taking notice of us. The Sri Lankan navy has been capturing our fishing boats. He (Kamal) is curious and concerned about us. He is our “fisher-friend”. It has come to a situation where we can’t go and fish. If caught, we get two years in jail and pay a fine of up to Rs 2 crore. Such a thing will never exist in any democratic country in the world. Our livelihood is being taken away from us. Many years they’ve been telling us they’ll do something. We begged Sushma Swaraj to solve our problem. Her only solution was don’t go to international waters and fish there. Kamal Haasan is our lifeboat. I hope he can help us. We don’t belong to any political party, we are just fisherfolk,”

“My political journey begins. Serving people is my priority. I live in people’s hearts.” He added that APJ Abdul Kalam was an inspiration.

The Actor turned Politician Kamal Haasan told a press conference that there was “no politics” involved in his visit to the late APJ Abdul Kalam’s residence, and there was no politics in the school visit also. They can stop me from going to school but not from learning.

“Kalam is an important person for me…I was attracted by his patriotism and aspirations… There is no politics in the visit to his house,”