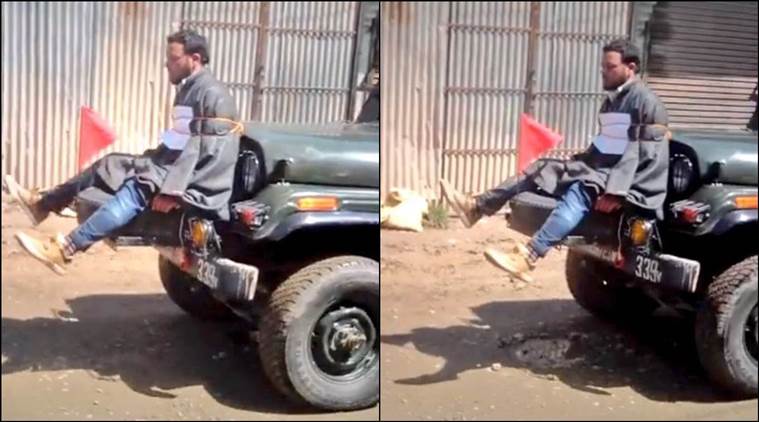 Major Leetul Gogoi, the director in the eye of the “human shield” storm, has trouble coming his way. Kashmir Police, who registereaFIR in the case last month have declined to drop the case against him. So what happens to the case from here on?. Earlier, Captain Amarinder Singh, Chief Minister of Punjab, has greeted the army chief’s decision to honor a major, who had allegedly tried a Kashmiri man to a jeep to use him as a human shield, as upholding the highest traditions of the Army.

Kashmir Police can take on the investigation against the officer, but they cannot arrest him. In case they need to question the officer, the cops can at best go to the army cantonment and question him under the supervision of military, civil servants.

At the conclusion of the investigation, a charge sheet will be filed in a criminal court against the officer. It is at this grade that the army will step in and inform the court that the officer should not be tried in the regular criminal tribunal. The army will be magistrate to court-martial the officer, (Pathribal case). Meanwhile, the parallel proceedings of Court of Inquiry by the military have no meaning as a criminal investigation is still under way.

Kashmir Police, who registereaFIR in the case last month have declined to drop the case against him.

On March 24, 2000, five civilians from south Kashmir, including a 50-year-old man, were killed by the Army in an alleged fake encounter in Pathribal. The Army dubbed the victim’s foreign militants belonging to the Lashkar-e-Taiba, and said they were responsible for the killing of 35 Sikhs in Chattisinghpora.

Following which, their bodies were charred beyond recognition. Subsequently, allegations emerged that the men were civilians picked up from different parts of south Kashmir and killed in a fake encounter. In January 2014, the Militia gave itself a clean chit in the Pathribal encounter case and decided not to court martial its seven top officers, saying there was no indication to proceed against them.

Following public protests, the Jammu and Kashmir government ordered the exhumation of bodies and DNA tests to determine the identity of the men killed by the Army. Investigations proved that the men were civilians who had gone disappeared from south Kashmir.

The case was given over to the CBI, which charged five Army officers Ajay Saxena, Brijendra Pratap Singh, Sourabh Sharma, Amit Saxena and Idress Khan, all belonging to the 7 Rashtriya Rifles with abduction, murder, criminal conspiracy and destruction of evidence.

While the CBI recorded a charge sheet against the Army officers before the Chief Judicial Magistrate in Srinagar, the Army opposed because prior sanction under AFSPA is needed for prosecuting Army officials. The objection, however, was directed down by the court.

After disappointing to get a reprieve from the local court and the J&K High Court, the Army shifted the Supreme Court which, in 2012, gave the Army full discretion to choose between a court martial and a criminal trial for indicted officers. The Army chose court martial but later vindicated all five officers for want of evidence.

1 Killed and 12 Injured in Violence at Saharanpur, Uttar Pradesh