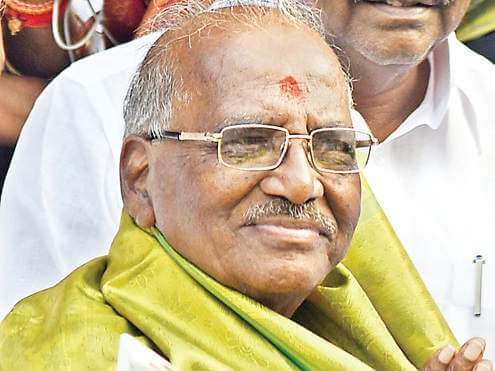 E. Madhusudhanan is a politician and former minister in Tamil Nadu, India. He passes away due to an age-related illness.

He is the Presidium Chairman of the Anna Dravida Munnetra Kazhagam party. He supports the current chief minister of Tamil Nadu Edappadi Palanisamy and deputy chief minister O.Paneerselvam faction of Party.  He was elected to the Tamil Nadu legislative assembly as a candidate of AIADMK (Puratchi Thalaivi Amma) Edappadi Palanisamy and O.Paneerselvam faction in the RK Nagar by-election following the death of Chief Minister Jayalalitha. He served as Handloom minister in the Jayalalitha cabinet formed after 1991 election. Check out below for Madhusudhanan Wiki, Biography, Age, AIADMK Party, Political Life.

On 19 July 2021, AIADMK Madhusudhanan’s health condition gone worse and was admitted in Apollo Hospital, Chennai. According to sources, he was in the critical stage and was in observation at ICU. Sasikala, Panneerselvam and Edapaadi Palanisamy visited hospital to meet Madhusudhanan.

In 2000, Late Chief Minister Jayalalithaa had removed him from the post of ADMK party propaganda secretary. Later, he became the party’s Anaithulaga MGR Fan clubbing secretary. In 2010, Madhusudhanan was retained as presidium chairman ADMK Party and continuing his service till now in the same post of the Party.

In 1991, he was first elected to the legislative assembly from R K Nagar. He defeated V Rajasekaran of Bharatiya Janata Party by a margin of 25,000 votes. He contested faction led by Jayalalithaa in 1989 and lost the polls to DMK’s Sargunam in R K Nagar Constituency.

Recently, he joined the faction led by O. Panneerselvam and his candidature is not a surprise. He was fondly called as Madhu annan among political surroundings and he had been a resident of north Chennai for more than 50 years and is a popular figure among with people. Madhusudhanan caste and family details will be updated soon.

Check out the latest photos of ADMK Madhusudhanan,