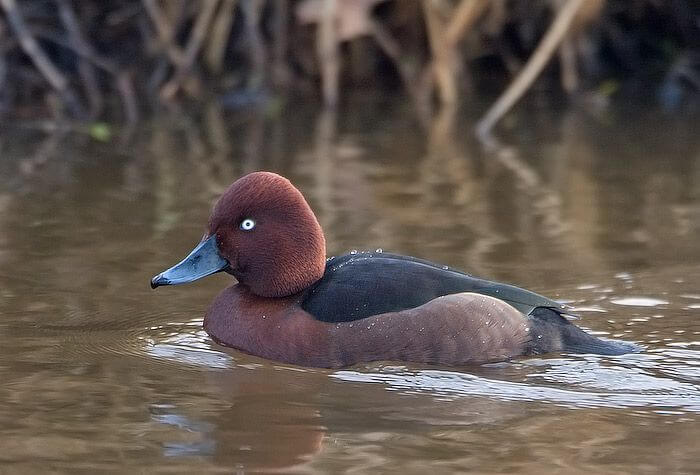 Madagascan Pochard is an exceptionally rare diving duck species. These birds are popularly known as Madagascar pochard and it comes under the species Aythya. This duck was thought to be extinct for 15 years but they regained from the verge and placed in the remote lake in Madagascar. The family of these diving ducks is Anatidae and the order is Anseriformes. Moreover, these species come under the genus Aythya. You can find these birds especially in the wetlands of Madagascar which is also considered as the endemic of this location. But now these species were widely populated in Lake Sofia and Lake Matsaborimena. The size of these ducks will be around 42 and 56 centimetres. The iris looks dark in colour but will turn white on its first winter. Then the matured male ducks will have dark chestnut heads, chins, throats, breasts, and necks. The beaks and legs are in dark greys with black nails. In the late 1940 or early 1950s, these species started to decline by the introduction of several new fish species in the lake.

As Madagascan Pochard comes under the species of Aythya. Along with Madagascar pochard, it has 12 different species in this world. Here we have listed all the species which come under its family.

In 2006, before rediscovering the species, the found the last male bird in the Lake Alaotra on the Central Plateau of Madagascar in 1991. They safeguard the male bird in Antananarivo Botanical Gardens until it dies. Later the fork of these birds was found at the Lake Matsaborimena located in the remote area of northern Madagascar. It is a cold, deep crater lake with some aquatic plants and surrounded by heavy forest. Then it was listed by IUCN Red List under Possibly Extinct species but after it was rediscovered these species was put under the list of Critically Endangered in 2007.

The Durrell Wildlife Conservation Trust and the Wildfowl and Wetlands Trust were involved in various rescue plans to save this bird from decline. A group of people went to the places and took the ready-to-hatch eggs from their nest and incubated them in a laboratory located near the lake. After hatching, the ducklings were taken to the local hotels to grow them safely. Then they took several rescue plans to save these birds.