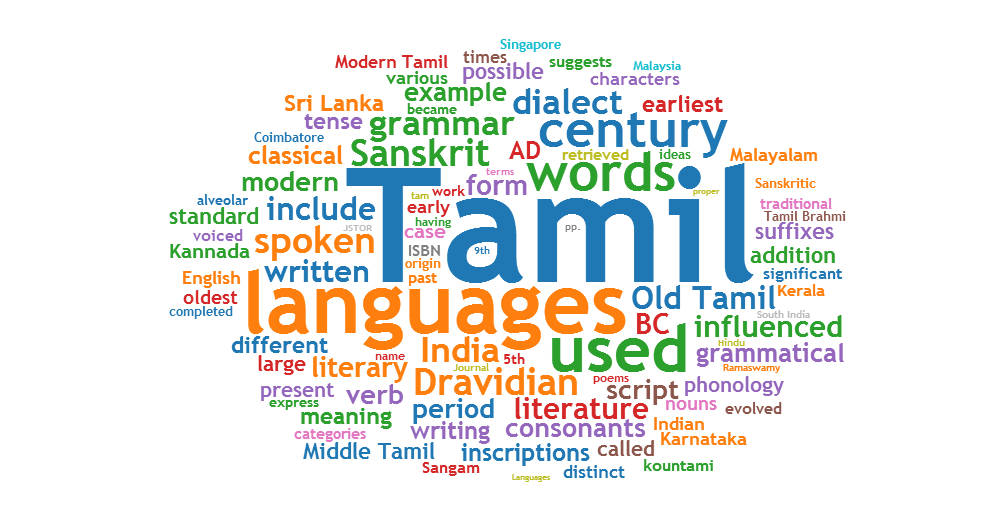 Tamil is one of the oldest languages in the World. The Tamil language is spoken predominantly by the people of Tamil Nadu and Sri Lanka. Apart from these, Tamil is one of the official languages in many countries. Many researchers have amazed on knowing the facts about Tamil. Tamil is not only a pride for the Tamil people but also for each and every one in this world. Here are few lesser known facts about Tamil:

Before the origin of many cultures, languages, religions and civilisation, the Tamil language prevailed in this world. There is no approximate date but it is considered to be there for more than 20000 years. The only oldest language which is still spoken widely is the Tamil Language. Research says that the Tamil language is older that Harappa, Mohenjo-Daro and the Sumerian Civilisation.

Many poets who were very attached to the language have written poems which are still being used to teach everyone about life. Many Tamil Manuscripts were burnt which is not only a loss for the Tamil people but also a loss to the whole world. One of the biggest library “Yaal” was burnt on May 31st, 1981. Yaal library contained more than 97,000 books and rare Tamil manuscripts which are no more available.

Tamil people are utilising the few available Manuscripts and poems and translating it into other languages. Thirukural, Aganaanooru, Puranaanooru, Perunthogai and much more Tamil literature are being celebrated by all the people.

The only language in the world which is also used as a name for the children is “Tamil”. There are many people with names Tamil, Tamil Selvi, Tamil Selvan, Tamil Pandian, Tamil Bharathi and much more. The word Tamil also means beauty and natural.

Apart from being a widely spoken language in Tamil Nadu, Tamil is also the official language in Singapore, Sri Lanka, South Africa, Malaysia and Mauritius. If you are travelling to these countries, then there is a high chance of seeing the name board in the Tamil language. You might also get a chance to see the buses which has name boards running in Tamil as well.

The only language in the world which is worshipped as a goddess is Tamil. There is a temple located at Karaikudi, Tamil Nadu where people worship “Tamil Thai”. “Thai” is a Tamil word which means Mother. People are worshipping the language as a Goddess.

These facts are just a few drops of Facts about Tamil. There are many hidden and many burnt!

Everything You Must Know About Tamil Nadu