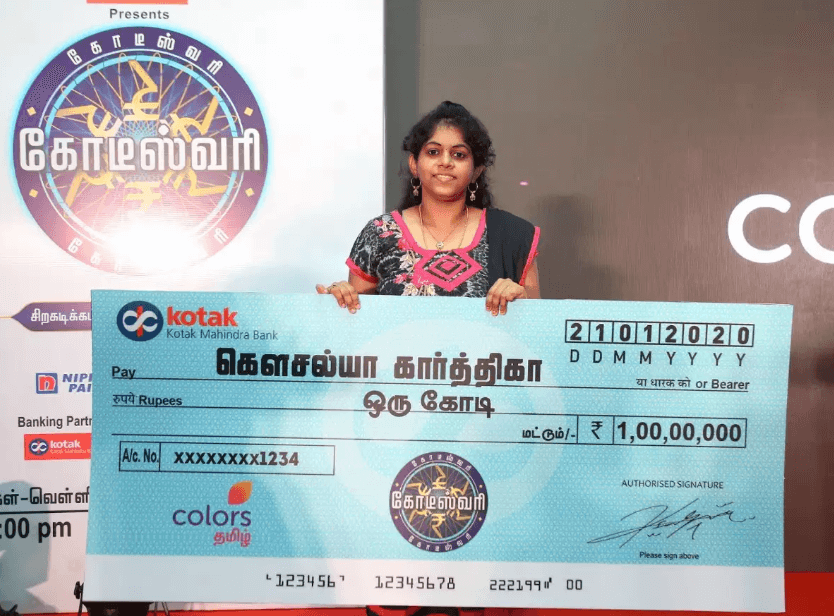 Kousalya Kharthika from Madurai was in trend after winning the popular show Kodeeswari. Radhika Sarathkumar’s quiz show Kodeeswari, running in it’s first season, welcomed its first Kodeeswari on Tuesday night’s episode on Colors Tamil. Kousalya Kharthika, 31, who suffers from hearing and speech impairment impressed everyone and took home 1 crore. According to reports, Kousalya is the first differently-abled woman to win the show globally.

She has completed B.Sc (Fashion Technology), M.Sc in Information Technology and an MBA degree. Currently, Koushalya Kharthika works as a junior assistant at the Principal District Court of Madurai. She is married to Balamurugan and blessed with a baby boy named Abinav (1-year-old).

Bagging the huge amount, Koushalya says, “My family has always stood by me throughout my life and now, I can do something for them. It’s overwhelming, and I would like to thank the channel immensely for this opportunity. I want to help as many people as I can, especially the ones who struggle to live a normal life, unable to hear even their own child’s voice. For myself, I would like to finally travel with my family to all the beautiful places I’ve seen in films, Switzerland being a definite destination!”

She also added “I first want to do my bit for people in need, especially the Deaf and Dumb school in Nagarkoil where I studied. Additionally, I want to visit either Italy or Switzerland which has always been my dream. If possible, I would like to buy an own house for ourself.”

In the episode, Koushalya has answered totally 15 questions which made him the first Kodeeswari. Viewers can also watch the full special episode on VOOT.