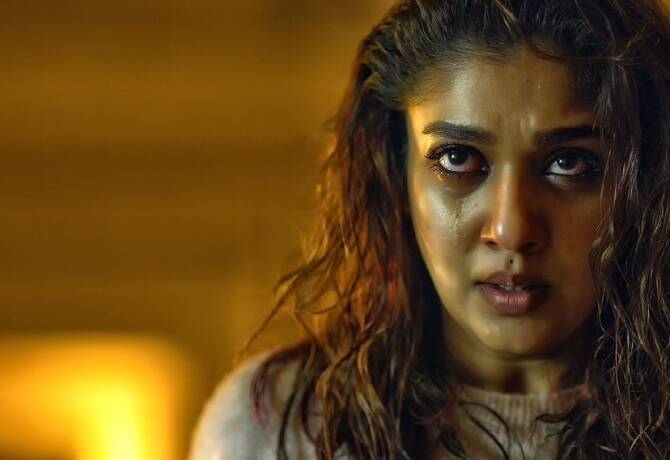 Kolaiyuthir Kaalam Movie Review: After facing lots of struggles, Nayanthara’s latest release Kolaiyuthir Kaalam hits the screens today. Directed by Chakri Toleti, KK is one of the thriller films that you expect to be extremely horror. The story revolves around Nayanthara (deaf-mute) who stays in a haunted mansion. Actress Bhumi Chawla plays one of the residents. Rohini Hattingadi and Malayalam actor Prathap Pothen played a prominent role in the film.

Like other horror flicks, Kolaiyuthir Kaalam has also some typical horror elements like doors closing on their own, swaying trees, dogs barking and the like. One fine day, a murder takes place at the mansion. However, Nayanthara senses it and tries escaping from a hooded figure. An official tamil remake of 2016 American film, Hush runs with minimal dialogues and a background score that helps keep the suspense. The film is majorly shot inside a single bunglow. The interesting and engaging screenplay played a crucial role.

While comparing to other recent releases from Nayanthara, the collections of Kolaiyuthir Kaalam seems to be poor because of its delay. Though it looks promising with the content, the film has gone through a lot of legal issues resulting in the delay of the release more than 5 times.

Overall, the Kolaiyuthir Kaalam Tamil movie has a lot of genuine elements that could have been explored. There are also some small beautiful emotional scenes between Surabhi and her mother, where she gives her half a coin.

Kolaiyuthir Kaalam was jointly produced by Vashu Bhagnani and Deepshikha Deshmukh. Music director Yuvan Shankar Raja has composed the songs and background score for this movie. Cory Geryak is the cinematographer and Rameshwar S. Bhagat is the editor for this movie. Tamannaah Bhatia has reprised Nayanthara’s role in Hindi remake Khamoshi, which released on June 14, 2019.