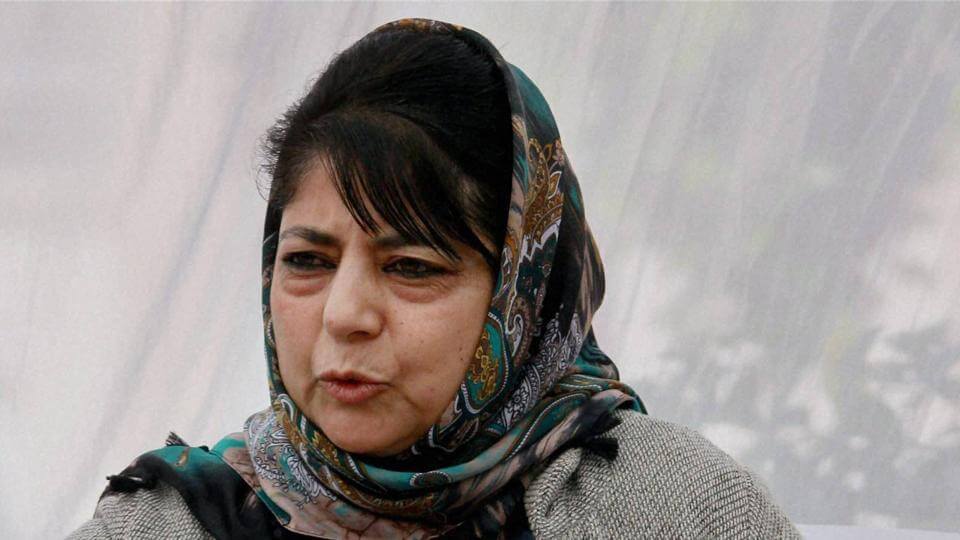 The clamor for governor’s rule in violence-hit Kashmir is likely growing. Be it the opposition parties in the Kashmir or a section of the BJP administration in Delhi, and many seem to be for the CM Mehbooba Mufti stepping down. The once-firebrand Peoples Democratic Party (PDP) leader, who has been credited with bringing her father Mufti Mohammad Sayeed back inside the state’s mainstream politics, has become irrelevant now. Lately, Kashmir protests made PM Narendra Modi call Governor Vohra for talks.

People at both the state and central levels have expressed their displeasure over the way she has handled the Jammu Kashmir situation. “Mufti Mohammad Sayeed ki beti se kuch nahi hoga. Governor’s rule must be imposed in Kashmir,” said the BJP leader Subramanian Swamy last week, even as the chief minister has arrived in New Delhi to meet Prime Minister Narendra Modi.

The state’s main opposition party, National Conference (NC) has called for PDP-BJP government’s dismissal, beyond a “judicial probe” on the death of eight civilians while the Lok Sabha bypoll in Srinagar. The party demanded that Mehbooba steps down for failing to provide a secure environment throughout the electoral process.

NC general secretary Ali Mohammad Sagar has termed the polling day deaths as “target killings,” and demanded a probe into the CM’s role. Even PDP MLA has admitted that the Chadoora murders were orchestrated, he had claimed.

The clips that emerged on the national television in the following days has further promoted the notion as all was not well in the Valley. The first video showed Kashmiris heckling a jawan on polling day, and it created national outrage. Prime time television debates had Persons decrying the insult to the country’s armed forces, and the cricketer Gautam Gambhir has tweeted that 100 “jihadi lives” should be taken for every slap a jawan receives.

Nevertheless, the PDP remained silent. The next day video of a Kashmiri man who tied to an army jeep went viral. The 22-year-old handicraft artisan was used as the human shield by the Army.  The loudest voice was that of NC working president and former CM Omar Abdullah who called the act as “unacceptable.” Even then, the PDP did not stir.

“Kashmiris hadn’t expected such indifference from Mehbooba, and she has shocked the people of Kashmir. It shows as if the sight of a Kashmiri dying only makes her look the other way,” told an engineering student on the condition of the anonymity.

The unrest which followed the killings is still to be contained. If the streets of the Kashmir seem normal on one day, then they erupt on the very next. It is also the first time in the years that students have taken the lead in protests. Their participation has begun with students of a Pulwama college agitating against the government. As videos of the police had a crackdown on the students went viral, others including girls also joined them on the streets.

Growing anger against the state and the gross mishandling of the summer unrest of 2016, which claimed about 90 lives after the encounter killing of the militant leader Burhan Wani is spilling into this year. According to the officials, over 400 incidents of stone-pelting were reported in the Kashmir from last October 2016 to March 2017.

A few days before, it was reported that Mehbooba had lost favor even with the BJP high command. Many believed that the meeting between PM Narendra Modi and the Jammu Kashmir CM was held primarily to discuss the strained alliance between the two parties in the light of a report made by Ram Madhav, a BJP’s pointsman on Kashmir.

While the CM herself did not react to this, voices of dissent began breaking out from the PDP itself. State minister for the education Altaf Bukhari termed Madhav’s statement as “indefensible” and even refused to share the stage with him.

The PDP minister has said the remarks of senior BJP leaders put pressure on the PDP. And added whose support base in the core constituency of Kashmir Valley has eroded significantly due to the “little action” by the BJP as far as the Agenda of the Alliance, the governance has a framework agreed by the two parties for ruling the state – is concerned.

Bukhari told that the alliance had no “ideological basis and it was formed for the cause of development. What are we giving to our people if even that is not happening?” he questioned. Bhukari also believes “talking to Kashmiris” is the only solution to the ongoing unrest. “You cannot think that the situation would improve by being indifferent. Talking to the Kashmiri people is the only resolution to this issue,” he said.

Sources said the voices of dissent in the PDP are getting louder as both workers and the ground-level leaders feel that the local leadership is conferring no sympathy to the people. “Omar Abdullah would at least express the grief, and oppose killings by saying that stones shouldn’t be answered with the bullets. But Mehbooba was not showing any sympathy despite being a woman and a mother,” told a PDP leader on the condition of the anonymity.

After her meeting with Narendra Modi, the chief minister spoke of “how she told the PM to review the Indus water treaty, on considering that Kashmir is losing Rs 20,000 crore every year.” It did not give Kashmir’s angry population anything to chew on.

“Mehbooba’s image was that of a protector of human rights. In the 90s, we would have seen the photographs of her being dragged away by police for protesting against rights violations,” said a senior journalist Sheikh Mushtaq. “But now she is telling the people that their children would be shot if they pelt stones.”

The repetitive quality of her public speeches is not doing a lot of good either, the journalist claimed. “The CM is living in the past, and she is trying to remind the Kashmiris of occasions when she had saved them from police excesses, how the PDP government had opened the Muzaffarabad road. And she portrays her father’s act of allying with the BJP as a move that is meant to benefit the people,” he said.