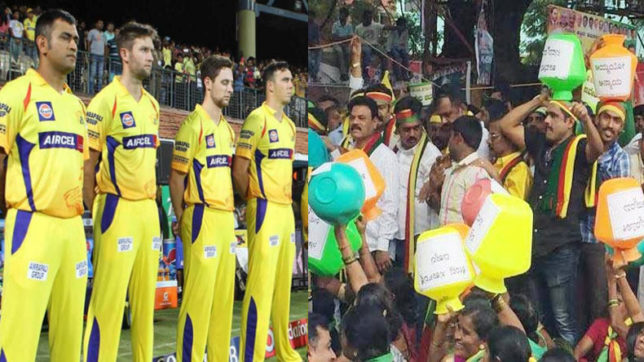 Political parties were also taking steps to cancel the match with the state boiling against the Centre, which fails to set up a  Cauvery Management Board (CMB) and Cauvery Water Regulatory Committee (CWRC).

According to the authorities, more than 2,000 police personnel would be deployed at the Chepauk stadium and, as a safety measure, people wearing black coloured dress will not be allowed to watch the match.

The use of transistors, cameras or any other audio visual recording equipment for recording and for communication the match details, statistics and images have also been prohibited.

Speaking to reporters, Tamil Nadu Fisheries Minister D. Jayakumar said necessary security would be provided to the IPL associations. He said it was for the organisers to decide whether to cancel the IPL match or not.

Meanwhile, a group of Tamil film industry, led by Director Bharathirajaa, R.K. Selvamani and V. Sekar bobbed an association called Tamil Panpaattu Peravai, and they told reporters that conducting IPL match when the state is struggling for Cauvery river water is an attempt to divert the youth. Bharathirajaa said they would hold the protest against the match.

Asked on the issue, Stalin said the DMK was not against holding the IPL matches here. However, he requested the match organisers to understand the problems faced by the TN people and act accordingly.

Viduthalai Chiruthaigal Katchi (VCK) chief Thol Thirumavalavan had also sought a ban on IPL matches in Tamil Nadu. Viewers have also been told not to dishonour the Indian flag. No food or drink from outside will also be permitted.