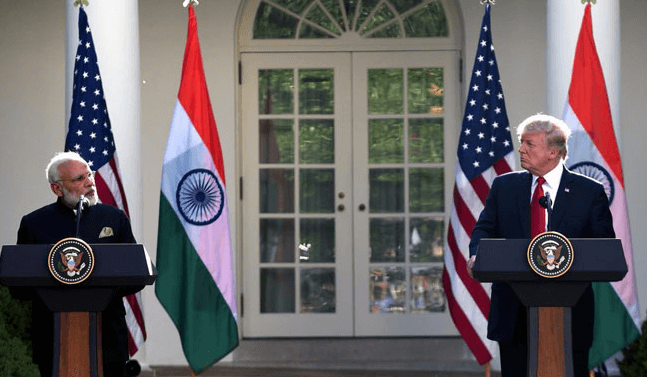 On Monday, US President Donald Trump told Mr Modi was a true friend of India, and that the relationship between the two countries

After the first meeting of both the leaders in the Rose Garden of the White House,  Mr Trump said,

“During my campaign, I pledged that if elected, India would have a true friend in the White House. And that is now exactly what you have — a true friend.”

“the top priority for both President Trump and myself is to protect our society from global challenges like terrorism; and because our aim is the strengthening of India and the USA — two great democracies in the world.”

“We will destroy radical Islamic terrorism.” “Both our nations have been struck by the evils of terrorism, and we are both determined to destroy terrorist organisations and the radical ideology that drives them.”

“we discussed the serious challenges of terrorism, extremism, and radicalization, which are the major challenges facing the world today. And we have agreed to enhance our cooperation in fighting against these scourges. Fighting terrorism and doing away with the safe shelters, sanctuaries, and safe havens will be an important part of our cooperation.”

While the talks are going on by sitting together, Mr Trump thanked India for ordering military equipment. There was no announcement of the American decision to India to sell unarmed Guardian drones.

Mr Modi’s ideas for India’s development and he said

“I am sure that the convergence between my vision for a new India and President Trump’s vision for ‘making America great again’ will add new dimensions to our cooperation,”

In the meeting, Questions have been raised about the potential conflict including the approach to economic and commercial ties between Mr Trump’s America First and Mr Modi’s India First. Mr Trump said,

“I look forward to working with you, Mr Prime Minister, to create jobs in our countries, to grow our economies, and to create a trading relationship that is fair and reciprocal. It is important that barriers be removed to the export of U.S. goods into your markets, and that we reduce our trade deficit with your country,”

The strategic partnership to deal with the challenges in Asia Pacific, Mr, Modi said

“The increasing possibilities for enhancing cooperation in order to protect our strategic interests will continue to determine the dimensions of our partnership. We will continue to work with the USA in this region.”

Mr Trump always had a deep admiration for India and its people, and a “profound appreciation for your rich culture, heritage and traditions.”