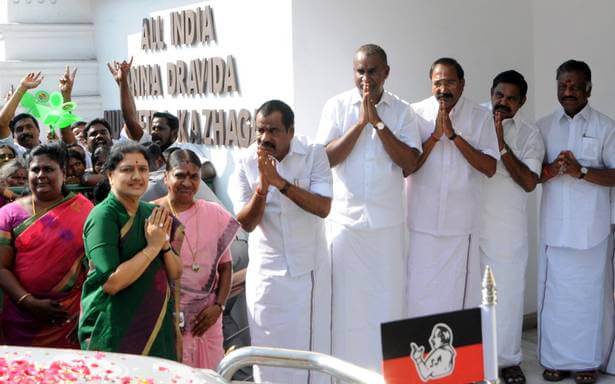 Income Tax officials carried out raids at the Jaya TV office, former Tamil Nadu chief minister J Jayalalithaa’s Kodand estate and various premises belonging to the V K Sasikala. The officials have been raiding more than 100 places including houses of TTV Dhinakaran, Illavarasi, Divakaran, Natarajan, starting from 6:00 am on Thursday. Income Tax Raid have targeted ten other groups as part of their operation called ‘clean money’.

According to the IT official raids, a total of 80 places were being searched which includes the residency of Sasikala’s husband, M Natarajan in Thanjavur, Sasikala’s brother Dhivakaran’s house at Sundara Kottai and the residence of sidelined AIADMK leader TTV Dhinakaran at Mannai Nagar in Mannargudi, and the premises of V K Sasikala’s supporters.

At the same time, the searches are also being conducted at the college controlled by Mr Dhivakaran and also at the S. Kamaraj’s house who recently appointed as food minister in Tiruvarur district.

The raid began with around 10 officials of the income tax investigation department entering the Jaya TV office at Ekkatthuthangal in Chennai around 6 am. They also searched the office of AIADMK mouthpiece ‘Dr Namadhu MGR’ situated in the same building.

A senior IT official said,

“Yes, the search is on. This is a part of our operation called clean money, and I cannot give any further details now,”

The ongoing I-T raids have targeted ten groups which include Sasikala family and other groups like Puducherry Sree Lakshmi, Surana, Sunil, Wind Subramanian are also being raided by shell firms and suspicious fund deposit.