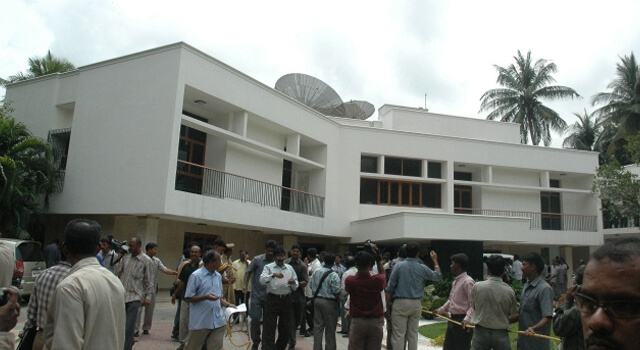 According to reports, Income-Tax officials conduct a raid at Veda Nilayam, the residence of former Chief Minister J Jayalalithaa, at Poes Garden in Chennai. The officials seized some important documents, electronic gadgets, including a laptop, and other storage devices. AIADMK functionaries raised slogans on condemning the searches in front of Jayalalithaa’s Poes Garden Residence.

A senior Income-Tax official said the raids were based on a specific input that some persons had conspired illicitly to remove a “crucial evidence” like documents and electronic gadgets from the rooms earlier occupied by jailed AIADMK leader V.K. Sasikala, a close aide of Jayalalithaa, and former Chief Minister’s Personal Assistant Poongundram.

A special team of the investigation wing got formal orders from the court to conduct the raid. The IT officials had entered Veda Nilayam residence shortly after 8.30 p.m with a strong posse of police personnel deployed on the road leading to the bungalow. The official said,

“We searched the rooms that were used by Sasikala and Poongundram. We did not open the rooms that were occupied by the late Chief Minister when she was alive. Some devices have been seized for further investigation. The entire premises are not being searched… we went on a limited mission,”

As the news of the searches on Veda Nilayam spread, Vivek Jayaraman, son of J. Ilavarsi, and Managing Director of Jaya TV and other AIADMK functionaries rushed at Poes Garden.

Some AIADMK functionaries raised slogans on condemning the searches and some of the ADMK cadres were attempted self-immolation by taking petrol from motorcycles parked in the area, police intervened and took them into custody.

“The raids shows OPS and EPS would commit any treachery to save their posts. The searches are an assault on Amma’s legacy and EPS &OPS are behind it. People behind these raids have to answer one crore ADMK cadres.”

“This is just political vendetta and targeting of one family.”

This is the second time Jayalalithaa’s Poes Garden is being raided. In 1996, the DVAC had raided the same place for the same case.