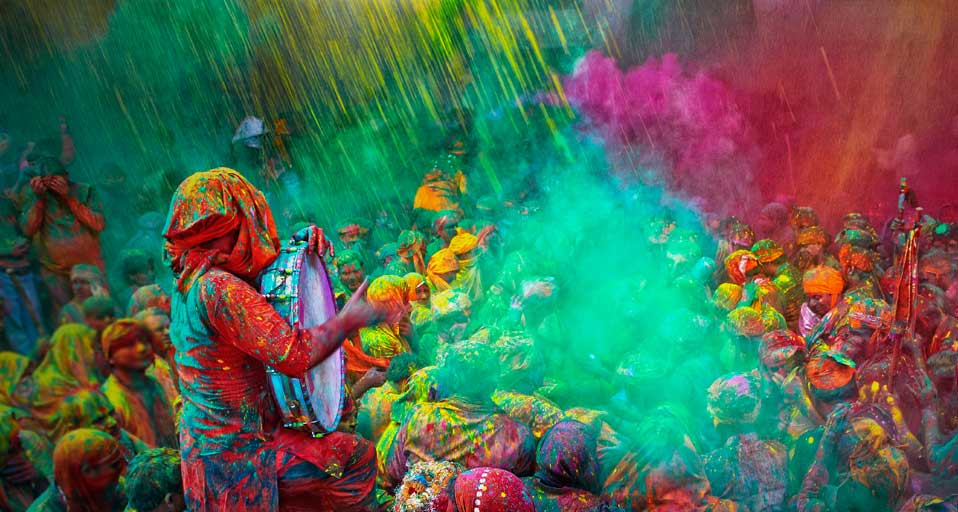 Holi is celebrated on 12th and 13th of March, and the festival which dates back to the 4th century is best known for the sight of carnival revelers gathering to toss colored powder into the air completely coating one another which always makes for dramatic pictures that duly reported around the world every year. Indian culture festival, Holi celebrates fertility, love and marks the end of winter. Holi is an Indian Culture festival of bliss smiles and lively colors.

The Holi festivities take place across two days. Holi is celebrated for two days that is Holika Dahan and Rangwali Holi. Holi is celebrated to represent the victory of good over evil, the former is staged the night before the big day and sees celebrants gather to observe a purification ritual in which a pyre of logs and dung-cakes burned. Families come together to roast grain, coconuts,  popcorn, and chickpeas together.

The main event is Rangwali Holi when everyone races around throwing a handful of fine colored powder (gulal) and spraying water a joyous occasion in which differences of caste ethnicity put aside.

From the Indian, Mythology Holi draws its origins. The idea of the holiday came from the legend of Radha and Krishna. Holi also takes inspiration from Hindu Vedic scriptures. An evil devil, Holika, was burned to death after her brother Demon King Hiranyakashyap, ordered her to pass through the flames carrying her nephew (his son) Prahlada who had angered him by forsaking evil to become a devotee of Vishnu. While Holika cremated, the boy survived thanked his faith.

The Holi timing is synchronized with the moon. The date of Holi celebration varies every year by following lunar cycles. Rangawali Holi took place on 13th March this year, and the pyres of Holika Dahan will be burned in the past evening.

Before the commencement of Holi, Hindus are advised to moisturize their skin carefully before taking part and a little oil to their hair to ensure the gulal can be easily rinsed out, and it is a bid to pre-empt disaster. The powders thrown should be non-harmful, and they most commonly made from a mix of food dye, flour, and water. Everyone spruces up and gathers on Sunday to distribute gifts of traditional sweets.