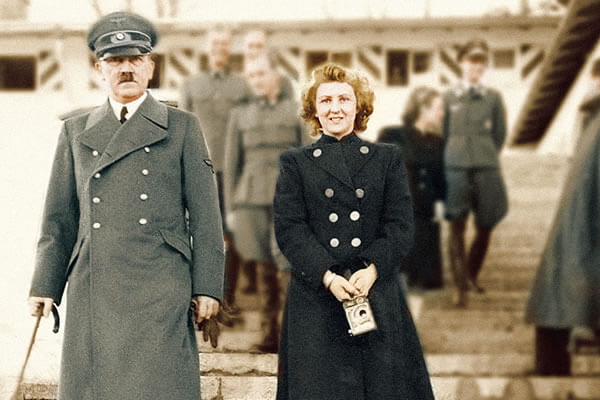 Besides each successful man, there is a woman who stands firm during his ups and downs. Likewise, Eva Braun is not known to the public until the death of Adolf Hilter was a strong lady who spends her whole life waiting for Hilter. Although she hadn’t lived as the wife of him for years, she is likely to be mentioned as the backbone of Mr.Hilter, a Nazi Germanist. Eva had waited for the Man with blind faith and love until her last minute despite being the time spent for Eva by Hitler is little. She had fallen for him, and of course, the wait of her love towards Hilter had over, and they finally joined hands only a few hours before their death.

The existence of Eva Braun, who was the mistress of Adolf Hitler for more than 12 years and, in the end, his wife for one day was one of the most successfully guarded secrets of the Nazi Germany. It was according to Hitler’s chauffeur Erich Kempka, Eva Braun was “The Unhappiest Women in Germany.” It was because Eva Braun had spent most of her time waiting for Hitler. But Hilter had always kept her out of sight in the situation when the guests arrived, and he almost invariably banished her to her room.

Eva Anna Paula Braun was unknown to the world until after her death during the final days of the Battle of Berlin in April 1945. She was born in Munich, in Germany, on February 6, 1912, and grew up in a solidly middle-class family. Her father Fritz Braun was a tenured civil servant, and her mother Franziska Kranburger Braun has also come from solid circumstances as the daughter of a veterinarian. Eva was the middle of two sisters, Ilse, who was three years older than her, and Gretl, who was three years younger. She was taught at a lyceum, then for another year at a business school in a convent where she had scored average grades and had a talent for athletics.

Soon after the birth of Eva, World War I broke out in August 1914, and Fritz Braun was called to the colors. He served as a lieutenant on the Western front and was one among those fortunate enough to survive the carnage and returned home in 1918. He joined an anti-revolutionary Freikorps unit soon after his return, which fought to free Munich from the rule of Soviet Republic. In 1919, an obscure Austrian Adolf Hitler had just returned to the Munich from the front to start a fateful career in politics.

Read Also: Time to know the weird facts about politics

Despite disliking the abstract ideas or ideals, Eva has led a happy, untroubled childhood and adolescence, delighting in friendships and the pleasures of youth. She was a good dancer, conscious of her attractive figure, and matured into a beautiful young woman who likely enjoyed flirting with men. Without any career ambitions, she had accepted the conventional pattern of working for an undemanding job so as to live her life and let things take their natural course. By the late 1920s, Munich had become a city dominated by the Nazi Party, which was a radically racist and a nationalist movement headed by Adolf Hitler.

Braun certainly had heard of Hitler and may even have seen him before accepting a job with Heinrich Hoffmann, owner of a photography shop, who had also worked for the Nazi Party as its official photographer since 1921. In 1929, Hitler had shown interest towards Hoffmann’s daughter Henriette, but as she was already involved with another Nazi, Hoffmann pointed out Hitler, a pretty young woman he had recently hired. For the next two years, Hitler had seriously involved with another young lady and his niece, Geli Raubal.

Fresh out of the convent school Eva Braun, at her 17, met Adolf Hitler for the first time when she was working in Munich in 1929 as the assistant of Heinrich Hoffmann, who was also the personal photographer of Hitler. From the moment as Hitler walked into the shop, Eva was in love. However, the complicated relationship between Hitler and Raubal had ended in September 1931 with her suicide, an event that had never been adequately explained.

Although Hitler was devastated by the death of Raubal, he was soon attracted to Eva Braun. By the time he was appointed as the chancellor of Germany on January 30, 1933, Eva had become his mistress. During the next 12 years, throughout the span of the Nazi dictatorship, the relationship between Adolf Hitler and Eva Braun had remained a state secret. Never even once did the German press or radio hint at the fact that the führer, whose only bride was said to be the German Reich, was in fact in a permanent relationship with an ordinary young woman of no particular distinction.

Hitler, who had never paid income taxes and was quite wealthy as a result of the large sales of his book Mein Kampf. It had bought Eva Braun with a villa on Munich’s Delpstrasse formally called as Wasserburgerstrasse as well as a Mercedes and a personal chauffeur. Despite being in luxury, Braun was often bored by her cocooned isolation. Hitler, busy consolidating his power, rarely had spent time with his Bavarian mistress, and Braun wrote in her diary as “He only needs me for certain purposes.” Eva’s mother, on the other hand, was sufficiently concerned about her daughter’s future to write a letter to Hitler asking what his intentions were regarding Eva. However, that letter drew no response.

In May 1935, Eva Braun had tried to kill herself with the overdose of sleeping pills. Hitler responded the next year by removing his half-sister Angela Raubal from the position of hostess and housekeeper at his mountain retreat, the Berghof, near Berchtesgaden. Eva Braun became the woman of Hilter’s house, though her existence remained known to only a handful of influential people in Germany. With the commencement of World War II in September 1939, Hitler spent even less time at the Berghof.

Nonetheless, Braun’s political influence on Hitler was apparently minimal. Eva Braun had never been permitted to accompany Hitler to his headquarters near the front. She had spent her time watching movies, doing calisthenics and skiing. Much of Eva’s life remained empty and boring, and it prompted Hitler’s chauffeur to assert after the war that she had been “the unhappiest woman in Germany and she spent most of her life waiting for Hitler.”

Towards the end of the war, after Eva’s sister Gretl had married the ambitious SS General Hermann Fegelein, Heinrich Himmler’s liaison officer to Adolf Hitler, it was easier for Braun to be seen at more functions at the Berghof as the appearance presented was of two sisters visiting each other. As the battlefield disasters became commonplace, however, the opportunities for social events in the Bavarian Alps dwindled. The more ominous the situation grew, the more loyal Braun had become to Hitler. After Hitler had survived an attempted assassination on July 20, 1944, she wrote to him in an emotion-laden letter: “From our first meeting, I swore to follow you anywhere, even unto death. I live only for your love.”

You may also like Photosynthesis Process | Formula & Chemical Equations

In early April 1945, Eva Braun had traveled by car from Munich to Berlin to be with Adolf Hitler at the Führerbunker. She had even refused to leave as the Red Army closed in, insisting she was one of the few people loyal to him left in the world. Hitler and Braun were married on 29th April 1945 during a brief civil ceremony which was witnessed by Joseph Goebbels and Martin Bormann. The bride wore a black silk dress.

With Braun’s marriage, her legal name changed to Eva Hitler. When she signed her marriage certificate she wrote the letter B for her family name, then lined this out and replaced it with Hitler, Although bunker personnel was instructed to call her Frau Hitler, her new husband continued to call his wife, Fräulein Braun.

The next day, they had committed suicide. Historians believe that he had shot himself while his 33-year-old wife of one day took a cyanide capsule. Their bodies were partially burned probably after the firing that had been held in the Berlin bunker. Soviet forensic experts took the remains to Moscow, and they returned it to Germany where they were secretly buried. The ashes of Hitler and Eva Braun were finally disposed of only several decades later.

What does Statue of liberty represent?