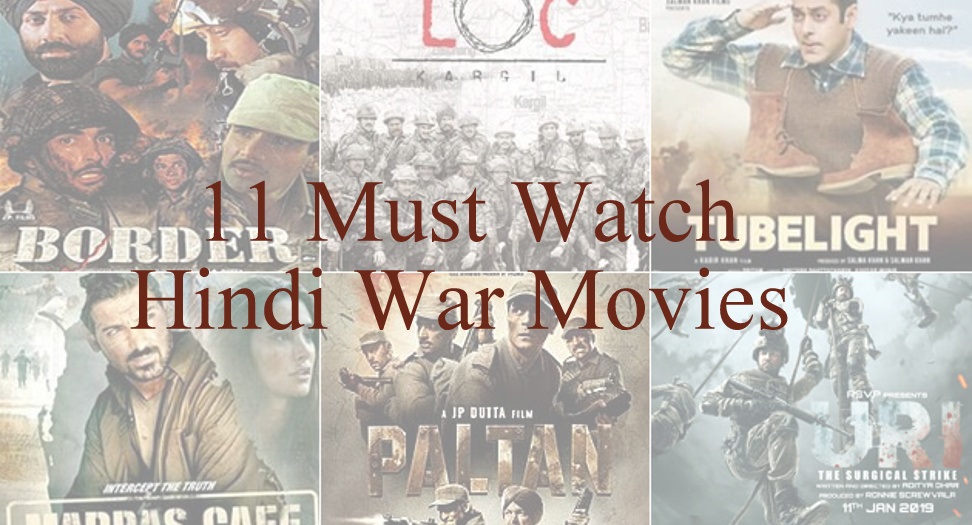 Watching movies is one of the best entertainment for all sorts of people. After watching movies you will be fresh and enthusiastic. Coming to India, Hindi (Bollywood) movies play a vital role in the media world. In Bollywood, we could see frequent high budget movies under various genres. Basically Indians always have a soft corner on the army people, so they love war or army based movies. Watching our favourite Bollywood star act as a soldier or an army officer in a war movie gives us an adrenaline rush number of times. So the filmmakers have made sure that war films never go out of trend. To increase the sociological as well as the psychological impact of the people Bollywood directors have taken some evergreen war movies.

Here we have listed the top 11 movies which you should definitely watch.

The Ghazi Attack is a war movie taken from the inspiration of true events from the Indo-Pakistani war of 1971. The story of this movie is about a chief naval officer of Indian Submarine and his team who was under the water for 18 days and fought against Pakistan. This movie shows what are all the mysterious circumstances faced by the crew and how they destroyed the Pakistani PNS Ghazi when they entered into Indian waters to destroy INS Vikrant. The movie has received numerous awards.

The movie Paltan is an action-war movie of the year 2018. The story of this movie is based on the 1967 clash that happens in the Sikkim border between Nathu La and Cho La after the Sino-Indian War. Zee Studios and J P Films have produced this movie and many top Bollywood celebrities are featured in this movie.

Battalion 609 movie shows the passion of Indian army soldiers and shows how Battalion 609 fights with the Taliban. In this movie, both the Indian and Pakistan army was planned for a friendly cricket match but the match was canceled due to the attack that held near the LOC of the Indian army. Then the Pakistani soldier gets who fond of cricket threw his bat to the other side of LOC at the Indian soldiers and others. Then the verbal conversation leads to the cricket match and the losing team will take their post eighteen kilometres back.

URI: The Surgical Strike is a Hindi military action film based on a true event. The movie plots the Indian army’s Surgical strike conducted against militant launch pads in Pakistan occupied Kashmir. In this cover operation, nearly 35-50 militants were reportedly killed. To take revenge for the terrorist attack they entered into Uri and killed 19 Indian soldiers but Pakistan denied the incident.

72 Hours: Martyr Who Never Died is the biographical movie of Jaswant Singh Rawa. The movie is based on the story of a Rifleman Jaswant Singh Rawat from 4th Garhwal Battalion. He fought during the 1962 Sino-Indian War. At his young age, he decided to join the Indian army and got training from Garhwal in Pauri Garhwal District. After a short training, his paltan sent him to defend the encroaching Chinese army from the northeastern front. Due to some bad circumstances, the infantry has to step back but Jaswant Singh Rawa refused to set back. He fought alone against the Chinese army for 72 hours.

Dear Friend Hitler is a multilingual movie in India, which was released as Gandhi to Hitler in Hindi. The story of this movie is based on the letter written by Mohandas Gandhi to the leader of the Nazi Party and Chancellor of Germany Adolf Hitler. The movie was set during the time World War II and the story revolves around the relationship of Hitler with his long-term lover Eva Braun. Then the movie shows the different ideologies of Gandhi and Hitler.

Kesari is a Hindi language action war movie. The movie recollects the ancient event Battle of Saragarhi that was held in the year 1897. In this movie, they showed how the 21 soldiers of the 36th Sikhs of the British Indian Army fought against 6,000–10,000 Afridi and Orakzai Pashtun tribesmen. This action movie was produced by Karan Johar, Aruna Bhatia, Hiroo Yash Johar, Apoorva Mehta, and Sunir Khetarpal.

Padmaavat is a Bollywood epic period drama of the 13th-century. The story is based on the real queen Rani Padmavat who was the wife of Maharawal Ratan Singh. She is well-known for her beauty and valour. The king of Delhi the tyrant Alauddin Khilji became obsessed with her and proclaimed war to get her. Did he get her or not is the plot of the story. The movie received a huge response from both critics and the audience.

02. Manikarnika: The Queen of Jhansi

Manikarnika: The Queen of Jhansi movie is based on the story of the real queen Rani Lakshmi Bai of Jhansi. In this film, they show how Rani Lakshmi Bai waged a war against the East India Company. Moreover in this movie, they explained the entire life history of Manikarnika in 148-minute. This classic drama was produced by Zee Studios, Kamal Jain & Nishant Pitti

Panipat is a Bollywood epic war film based on the real story of Marathas. The story of the movie is about the 18th century India, during the time a war emerged between Marathas and Afgan. In the Third Battle of Panipat commander-in-chief of Marathas army, Shadashivrao Bhau lead this army troop and fought against Ahmad Shah Abdali, the king of Afghanistan.

These are the best and all-time favourite Hindi war movies. Not only the above-given movies, but there are also plenty of movies taken by various directors. Comment below your favourite movie from the list.