Gudi Padwa is the festival that rejoices on the first day of the Chaitra month to mark the starting of the Hindu new year. It is mainly celebrated in Maharashtra. The day also celebrated as Ugadi, which is also known as Yugadi, primarily a new year festival in Andhra Pradesh and Karnataka. Both Gudi Padwa and Ugadi rejoice on the same day. The day is also considered auspicious for ‘vaastu puja’ and opening new businesses. In Maharashtra, several community processions are also taken out. 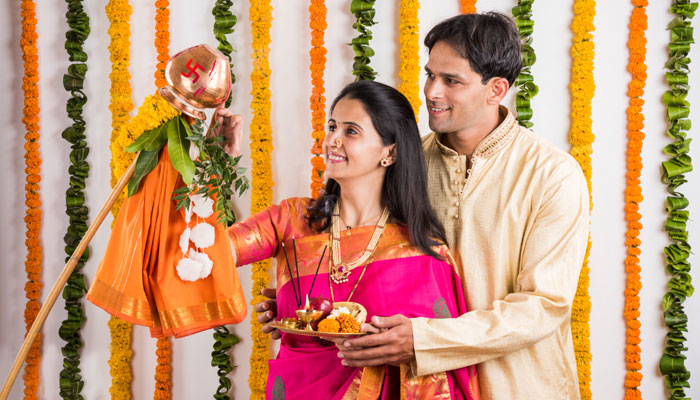 India, being an agrarian society, celebrates this day as the end of the harvest season and the beginning of a new one

There are numerous stories also that are attached to this festival. On of them is “theory of creation.” It is also evident as the day when Lord Ram after defeating King Ravana in Lanka, returned to Ayodhya. As per belief, the long ‘Gudi’ symbolizes victory and inspires people to prosper materially and spiritually.

The day begins with ritual oil bath followed by prayers. Oil bath and eating Neem leaves are must social conducts suggested by scriptures. North Indians don’t rejoice Gudi Padwa but start nine days Chaitra Navaratri Puja on the same day and also eat Neem with Mishra on the very first day of Navratri. One of the necessary food item on this festival is a paste of neem and jaggery. On this day, all houses are gutted. People also make rangoli designs in vicinity their homes. They dress up in new clothes and enjoy family congregations.

On this day, women practice sweets like ‘Puran Poli’ and ‘Shrikhand’ as also ‘Aambe dhaal’ and ‘Sunth Park.’ The day is also considered to be auspicious for ‘vaastu puja’ and opening new business establishments. On this day, several convoys are also taken out.

It believes that it is on this very day that Lord Brahma created the Universe. Therefore celebrated as the mark of a beginning for Hindus. India, being an agrarian society, celebrates this day as the end of the harvest season and the beginning of a new one. The day also has a mythological significance dating back to the time Lord Ram defeated Ravan and returned to Ayodhya, his birthplace.