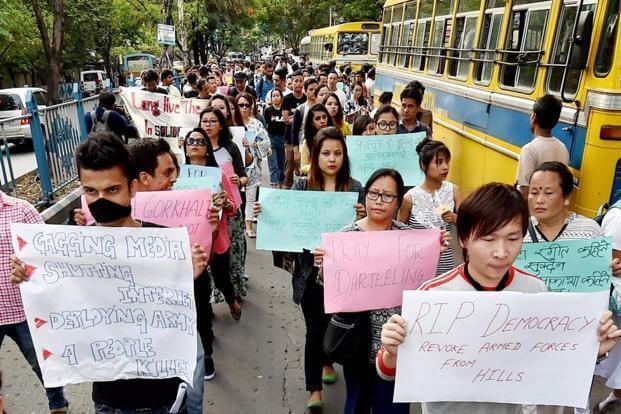 On Friday, As protests continue in Darjeeling over demands for a separate Gorkhaland state, the Gorkha Janmukti Morcha or GJM today permitted the hill station’s premier boarding schools to evacuate students. Though the city is in bandh for over a week now, GJM says it will permit school buses to utilise for half a day.

Authorities at Mount Hermon School and St Joseph’s School say they will make arrangements for students to go home safely. According to the school schedules, summer vacations are to start on Friday. They also said that students life is normal when they are inside the campus while comparing to outside on the streets of Darjeeling.

Protests continue in Darjeeling over demands for a separate Gorkhaland state, Darjeeling Schools To Evacuate Students

“These schools have seen things like these in the past and this time they will see through it,”.

“Darjeeling used to be one of the quality educational centres but over the years that has shifted because of the political troubles. Schools have lost numbers.” The headmaster of Mount Hermon School, Partho Dey, echoed his concerns.

From Wednesday, the Protests have been continued as tourists and locals made a distracted rush to board the few state-run buses leaving Darjeeling town. To keep order, the police announced first students, foreigners and then the rest would be allowed to board buses. To end the strike, Protesters want an assurance on Gorkhaland.

Dolma Bhutia, a Gorkhaland supporter who had organised a ceremony for those have died in these protests,

The West Bengal government has called an all-party meeting in Siliguri. But most parties won’t go as chief minister Mamata Banerjee is away on an official visit to Netherlands. The Morcha says talks will happen only with the centre.