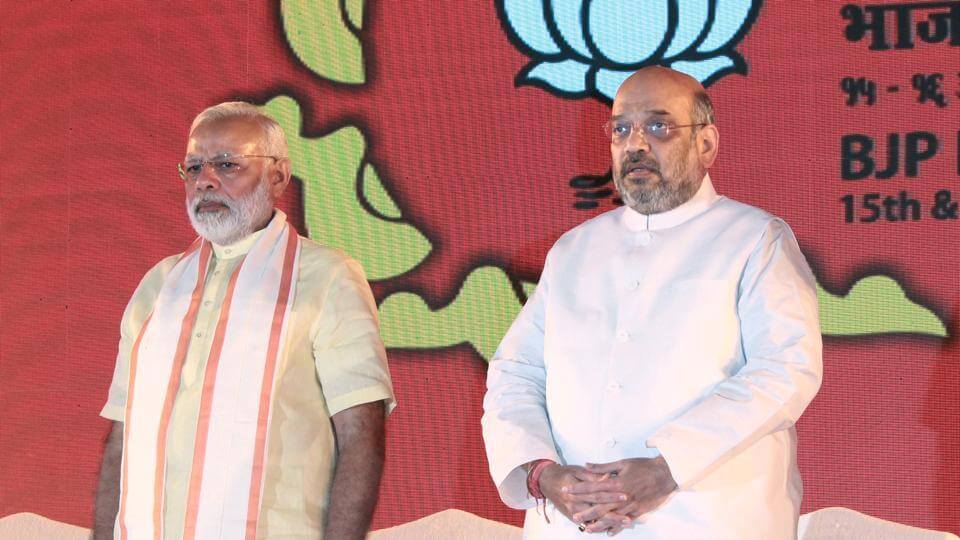 The golden era of BJP would begin when it has got chief ministers in every state and held power from panchayat to Parliament, says the party president Amit Shah on Saturday in an ominous warning to the political rivals desperate to prevent the saffron surge. Lately, BJP mentioned no ban beef if they come to power in the poll-bound Northeast States.

Shah’s comments, at the party’s national executive at Bhubaneswar, has come weeks after the ruling party at the Centre stamped its domination of the India’s political landscape by securing an unprecedented and overwhelming mandate in UP. The BJP is now aiming to grab the power in Odisha where the Biju Janata Dal is in its fourth consecutive term.

The BJP’s desire for expansion remains unsatiated despite ruling 13 states and sharing power with four others was evident from Prime Minister Narendra Modi’s roadshow on his way to the national executive meeting. He has fought sweltering heat to hold a 40-minute-long show on the streets of capital Bhubaneswar in the afternoon, waving and smiling to an enthusiastic crowd on both sides of the road.

There were clear indications that the BJP was looking to upstage regional parties from their strongholds, an ambitious plan like its vow of a “Congress-mukt Bharat.” Just three years into power, Shah has declared Modi, the most popular leader of the independent India who has got an “extraordinary connect” with the people of the country.

Shah said that it was not their peak and there should have the chief minister in every state. We have to rule from panchayat to Parliament and is only then it will be called as the golden era for the BJP. “Don’t be complacent. Let’s become an actual pan-India party to showcase not only the success of BJP but make India great in the committee of nations,” he said the party leaders.

Shah, seen as the chief architect of the BJP party’s poll victories, also trashed opposition claim about tampering with electronic voting machines (EVMs). Nobody had spoken of it when the BJP lost the 2004 and 2009 Lok Sabha elections and the 2015 assembly polls in Bihar and Delhi, he added.

Modi’s party won Uttar Pradesh, and Uttarakhand with the three-fourths majority retained Goa and grasped Manipur from the Congress. It would face polls in Gujarat, Himachal Pradesh, and Karnataka over the next one year ahead of the bells finally ring for the 2019 election. Shah is already in the election mode. He has asked every member of the BJP’s national executive team, including the Union ministers, to spare 15 days for the organizational works.

Shah will also spend 95 days till September, traveling across the country to meet workers at the booth level. His target area includes states such as Kerala and Odisha, where the BJP has a weak presence but high hopes. The list includes West Bengal, Telangana, Andhra Pradesh, Tamil Nadu and the Northeast, where the recent polls point towards a growing BJP presence.

Over the past one year, around 3.78 lakh workers enrolled in a program through which they will be sent outside their home state for organization works. Shah mocked the political observers who questioned the BJP’s ability to defeat the regional parties and cited the rout of the Bahujan Samaj Party (BSP) and the Samajwadi Party to buttress his argument.

“Earlier, a two-thirds majority was called a big victory. We changed that narrative by winning in the UP and Uttarakhand with a three-fourths margin,” Shah added. Modi will address the conclave on Sunday.