Sea is a big part of artistic life in Greece; it makes knowledge that many of the gods, goddesses, and creatures in Greek mythology originated in the water. Although most of us think of the Olympian gods and goddesses when we recall Greek mythology, the God of Sea, gods, and goddesses of the sea, also called as “Theoi Halloi” were also important parts of the legend.

Explore the legends and mythology encompassing the role of the ancient Greek God of Sea. There are many Sea Gods in Greek mythology; the most famous were the Olympian god Poseidon. Learn about each sea god in Ancient Greek mythology and their connections to the Oceanides, the Mermaids, the sea nymphs and the sea god called Proteus who assigned to as the “Old Man of the Sea.”

Poseidon was the god who controlled the sea. As the sibling of Zeus and Hades, he was very influential. Every sea creature and God of Sea and goddess fell under Poseidon’s kingdom. In some depictions, Poseidon described as a merman. In others, he showed as an older man with long white hair and a white beard. NEREUS is an ancient fish-tailed God of Sea, and his fifty Nereid girls presided over the sea’s rich bounty of fish and salt.  They were practitioners of fell magic, producing forth hurricanes and drought, and killing men with the power of the evil eye.

“I’m like Albert Schweitzer and Bertrand Russell and Albert Einstein in that I have a respect for life – in any form. I believe in nature, in the birds, the sea, the sky, in everything I can see or that there is real evidence for. If these things are what you mean by God, then I believe in God.” – Frank Sinatra

SOME LIST OF GOD OF SEA & GODDESSES OF SEA

AEGAEUS or AIGAIOS is a god of violent sea storms. He was a confederate of the Titans. AEOLUS or AIOLOS is the King of the winds. He kept the storm-winds, squalls and, tempests locked away in the hollows of the volatile island of Aiolia, to issue at the direction of the gods.

ACHEILUS or AKHEILOS is a shark-formed sea Daemon. ALCYONE & CEYX or ALKYONE & KEYX is the former king and queen of the realm of Trachis metamorphosed into a pair of kingfishers. The birds managed over the halcyon days, a day of calm seas suitable for sailing.

AMPHITRITE is the goddess queen of the sea who also the wife of Lord Poseidon. Amphitrite was the goddess who generated the sea’s rich bounty of fish and shellfish and also dolphins, seals, and whales. 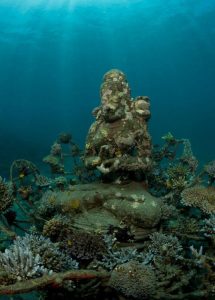 BENTHESICYME or BENTHESIKYME is One of the sea mermaids, a daughter of the god Poseidon. Her name indicates “Deep wave, “ and she was the wife an Ethiopian king called Enalos “the man of the sea.” BRIAREUS or BRIAREOS is the God of Sea storms. He was one of the Hecatoncheires, three hundred-handed, fifty-headed giants, and a son-in-law of Poseidon who made his home on the floor of the Aegean Sea.

BYTHOS is one the of the Ickhthyocentaurs or fish-tailed sea-centaurs. And the brother of him is Aphros who made the goddess Aphrodite to shore back her sea-birth. His name means “sea-depths.”

CABEIRO or KABEIRO is a sea nymph native to the shores of the island of Lemnos. Goddess of the Samothracian Mysteries and the mother by Hephaestus of the Cabiri. CALLISTE or KALLISTE is the sea nymph of the Island of Calliste. CAPHEIRA or KAPHERIA is also the sea nymph nurse of the god Poseidon. CARCINUS or KARKINOS is a large crab who partnered itself with the Hydra against in a battle against Heracles. It was crushed beneath the hero’s foot and placed amongst the stars as the constellation Cancer.

CETEA or KETEA is the monsters of the sea’s depths. One, sent by Poseidon to ravage Troy, was slain by Heracles, another sent to punish the Ethiopians which was destroyed by Perseus.

CETO or KETO is an early sea-goddess and the goddess of the monsters and menaces of the deep. Her name means “whale” or “sea-monster.”

DELPHIN is the leader of the dolphins. He added Poseidon in the wooing of Amphitrite, and as a premium was placed amongst the stars as the zodiac Delphin. DORIS is one of the Oceanides, the wife of Nereus and mother of the fifty Nereides and has presided over the mixture of fresh water with the brine as her name recommends.

EIDOTHEA is a prophetic sea-nymph and the daughter of the seal-herder God of Sea Proteus. ECHIDNA or EKHIDNA is a terrible she-dragon, half serpent, and half fair Nymph. She was born of the residue of the sea or the sea gods Phorcys and Ceto and joined with slime, sea-rot, fetid salt-marshes, eels, and lampreys. By the storm-giant Typhoeus, she became the mother of many dirty beasts. 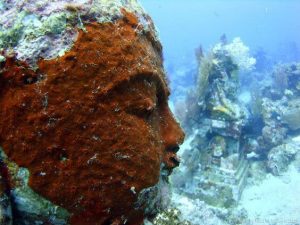 ELECTRA or ELEKTRA is one of the Oceanides, the wife of the sea-god Thaumas and mother of the Rainbow and the Storm-Gusts or Harpyiae. She probably presided over her namesake “amber” that colored clouds often are seen co-occurring the rainbow.

LEUCOTHEA or LEUKOTHEA is the goddess of the Ionian sea and a protector of sailors and fishermen. She was independently a princess named who was committed with the nursing of Dionysus. Hera drove her husband mad and leaving his anger she leaped with her son Melicertes into the sea, where the gods converted the pair into marine-deities.

MELICERTES or MELIKERTES is the another name for the child sea-god Palaemon.

You may also like God of Fire – Agni, and Vulcan

PROSEOOUS DAEMONES is an evil seaDaemons which haunted the dark caves of the island of Rhodes. They were confined beneath the island by their father Poseidon for their violations. PROTEUS is an ancient shape-shifting, prophetic God of Sea and the herder of Poseidon’s seals. PSAMATHE  is one of the fifty Nereids and was the goddess of sandy beaches. 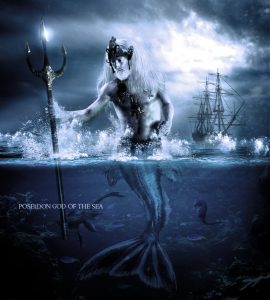 RHODE is a sea-nymph daughter of the god Poseidon and the goddess of the island of Rhodes.

SIRENS or SEIRENES are the three dangerous seas Daemons with the heads of women and the bodies of birds and lured Midshipmen to their deaths with their irresistible siren song. Some say they vaulted into the sea in despair when Odysseus sailed past uninjured.

SCYLLA or SKYLLA is a monstrous sea Daemon who spoiled on passing sailors. She had the upper body of a nymph, the tail of a fish, and a ring of six ravening dog-heads circling her waist. Some say she was killed by Heracles but revived to life by her father the God of Sea Phorcys with bright beacons.

TELCHINES or TELKHINES are also the Sea Daemons native to the island of Rhodes. They were practitioners of fell magic, producing forth hurricanes and drought, and killing men with the power of the evil eye. The gods defeated them in the deepness of the sea. TETHYS is aTitan goddess joined with the sources of fresh-water who guessed later as a sea-goddess similar to Thalassa.

God of Light | Let There Be Light