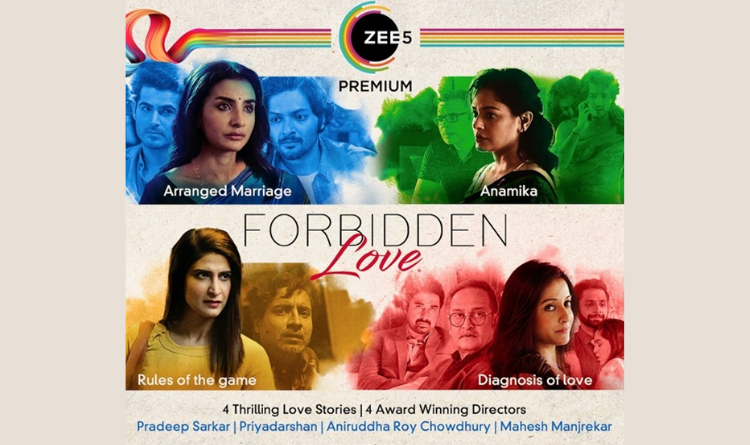 Watch Forbidden Love Movie Series Online: Forbidden Love is the latest ZEE5 original movie series that shows four different stories. The first two parts of the new anthology movie series is Arranged Marriage and Anamika. Both the series are receiving good reviews from the audiences. The other two series are Rules of the Game, Diagnosis of Love.

According to makers, the series mainly showcases the untold love stories that are often left out in Indian film and TV shows. Tamilrockers, an infamous website, leaked Forbidden Love full movie in HD quality on the day it gets released on the ZEE5 OTT platform.

Forbidden Love Movie Zee5 download link was spread on the internet and many torrent websites are allowing its users to save it for free which is completely illegal.

Arranged Marriage is the first part of the movie series that tells the story of a homos*xual relationship in Indian society. Directed by Pradeep Sarkar, this series stars Omkar Kapoor, Ali Fazal, and Patralekhaa in the lead characters.

Omkar plays the role of Neil (homose*ual man) who is forced to marry his lover’s cousin Kiya (Patralekhaa) due to family pressure. But Neil has not interested in living with his wife as he continues to meet his love Dev (Ali Fazal).

Anamika (Pooja Kumar) finds happiness from the man Ishan (Aditya Seal) who is very younger than her. She eventually falls in love with him. Whether her extramarital affair will be a new beginning or not forms the crux of the story.

Directed by National Award Priyadarshan, the Anamika series episode premiered on ZEE5 premium on September 9th. Actress and Model Pooja Kumar has performed some bold scenes with Aditya Seal which goes viral on the internet.