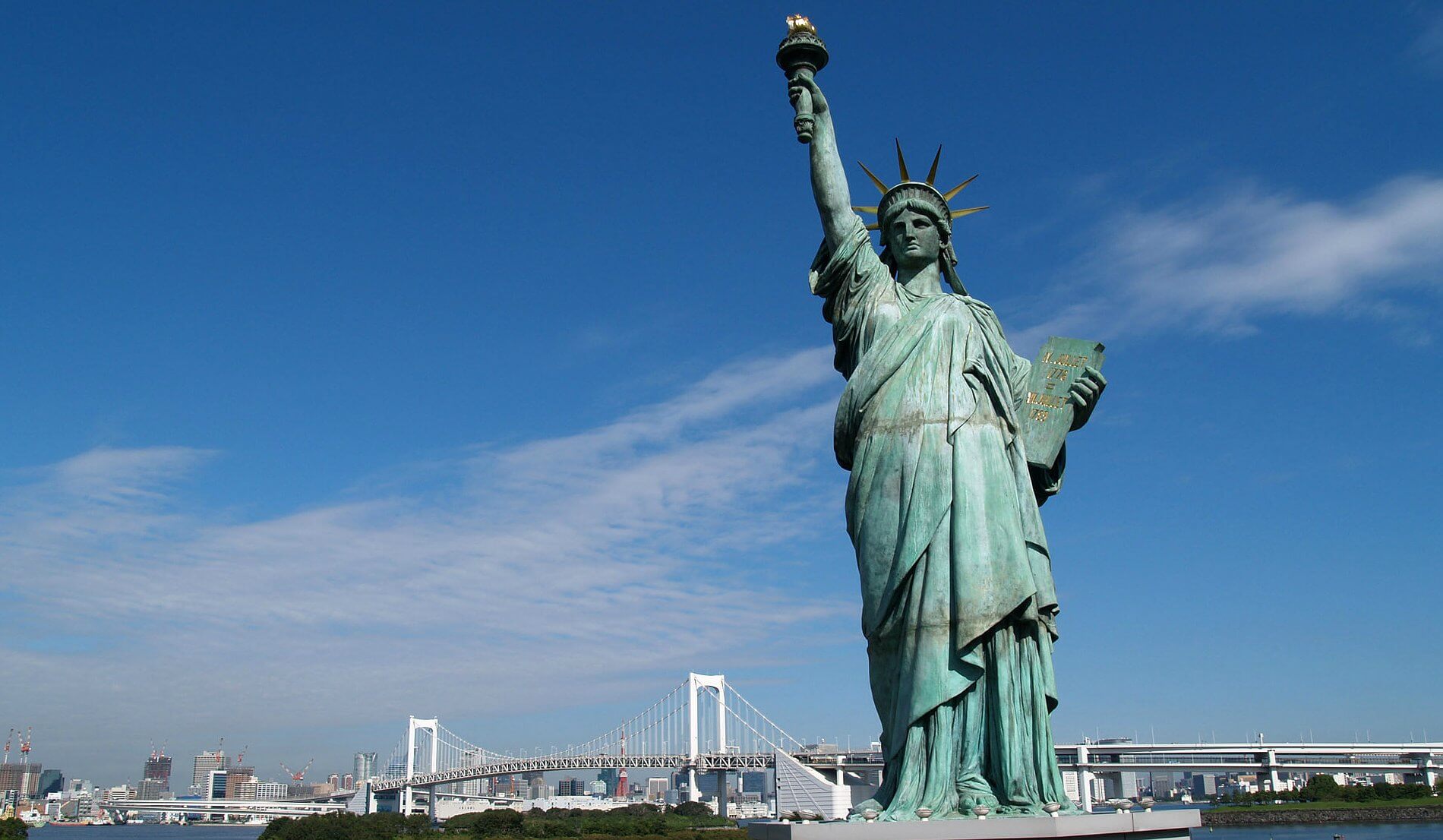 The Statue of Liberty is a joint effort between France and the United States, intended to commemorate the lasting friendship between the peoples of the two nations. The French sculptor Frederic-Auguste Bartholdi had created the statue itself out of sheets of hammered copper, while the man behind the famed Eiffel Tower, Alexandre-Gustave Eiffel had designed the steel framework of the statue. The Statue of Liberty was later given to the United States and erected atop an American-designed pedestal on a small island in the Upper New York Bay, which is now known as the Liberty Island and dedicated by the President Grover Cleveland in 1886. 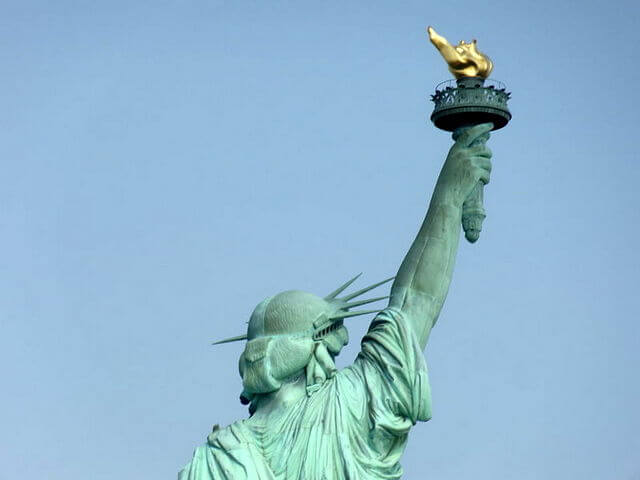 Over the years, the statue stood tall as the millions of immigrants arrived in America via nearby Ellis Island. In 1986, it had undergone an extensive renovation in honor of the centennial of its dedication. Today, the Statue of Liberty remains as an enduring symbol of freedom and democracy, as well as one of the world’s most recognizable landmarks. The grandeur of the statue is impressive, but it is the history of this lady that make her so interesting. Get to the facts about the Statue of Liberty and its history which you hadn’t known so far from here.

Facts To Know About The Statue of Liberty

The statue’s full name is “Liberty Enlightening the World.” Laboulaye proposed that a great monument is given as a gift from France to the United States in 1886 as a celebration of both the union’s victory in the American Revolution, and in the abolition of slavery.

The seven rays of the Statue’s crown represent the seven seas and continents of the world, each measuring up to 9 feet in length and weighing as much as 150 pounds. The face on the Statue of Liberty measures more than 8 feet tall

There are 25 windows in the crown, which symbolize gemstones and the heaven’s rays shining over the world. Visitors have to climb about 354 stairs to reach the statue’s crown.

The Statue of Liberty had become the symbol of immigration during the second half of the 19th century, as over 9 million immigrants came to the United States, with the statue often being the first thing they saw when arriving via boat.

There are about 154 steps from the pedestal to the Statue of Liberty’s head. The exterior copper covering of the Lady Liberty is 3/32 of an inch thick which is less than the thickness of two pennies, and the light green color called as patina is due to the result of natural weathering of the copper.

Although one cannot see Lady Liberty’s feet apparently, she is, in fact, standing among a broken shackle and chains, with her right foot raised, depicting her moving forward away from oppression and slavery.

A tablet held in her left-hand measures about 23 feet, 7 inches tall and 13 feet 7 inches wide. It was inscribed with the date of American Independence written in the Roman numerals as JULY IV MDCCLXXVI (July 4, 1776).

Lady Liberty is thought to have been hit by around 600 bolts of lightning every year since she was built. A photographer had captured this for the first time in 2010. 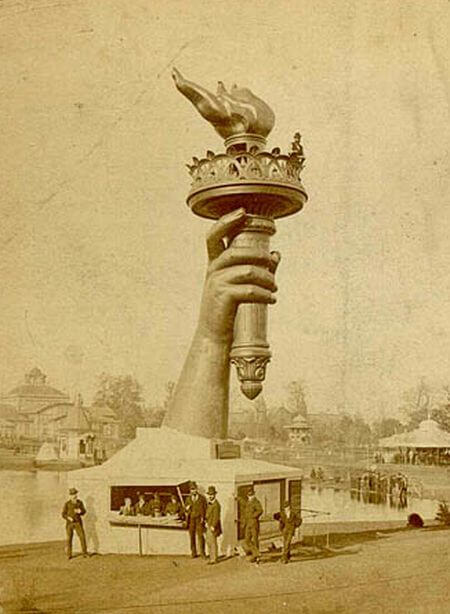 The arm at the 1876 exhibition

The French ship “Isere” had transported the Statue of Liberty’s 300 copper pieces packed in 214 crates to the United States of America. Although the ship had nearly sunk in rough seas, it arrived in New York on June 17, 1885. The Statue’s parts had remained unassembled for almost a year until the pedestal was completed in the year 1886.

After the terrorist attacks had held on September 11, the statue was closed for security reasons, with the pedestal reopening in 2004, and the statue in 2009, but only a limited number of visitors can go up to the crown.

The statue was again closed in the year 2012 due to the effects of Hurricane Sandy, with the island off limits to the public. The statue was reopened to the visitors on Independence Day, July 4, 2013.

There are various replicas of the statue of liberty, including a smaller version in the Paris, and one on the Las Vegas Strip in Nevada.

The Statue of Liberty’s most famous cinematic appearance was in the 1968 film “Planet of the Apes” where it is seen half-buried in sand. It was also showcased as destroyed in the movies “Independence Day” and “The Day After Tomorrow.”

The statue sustained a minor damage in 1916 when the German saboteurs set off an explosion during World War One. The torch-bearing arm suffered the most damage, and its repair works costing $100,000. The stairs of the torch were then closed to the public for the safety reasons, and have remained closed ever since. No-one has been able to visit the torch since.

The Statue of Liberty’s original torch is now on display at the monument’s museum.

When the statue was first erected in the year 1886, it was the tallest iron structure ever built. In 1984, the figure was also listed as a UNESCO World Heritage Site.

The cost of the statue was funded by the contributions of both the French and the Americans. In 1885, a New York newspaper entitled “The World” announced that $102,000 had been raised from the donors and that 80 percent of this total had been received in sums of less than one dollar.

History of Statue of Liberty

“La Liberté Éclairant le Monde” aka “Liberty Enlightening the World” is the official name given to the Statue the Liberty by the sculptor Frederic Auguste Bartholdi as a symbol of freedom to the entire world. Around 1865, the American Civil War drew to a close, and in recognition of the friendship established during the American Revolution, the French historian Edouard de Laboulaye proposed that France creates a statue to give to the United States in celebration of that nation’s success in building a viable democracy. The sculptor Frederic Auguste Bartholdi, who is known for large-scale sculptures, earned the commission. The primary goal was to design the sculpture in time for the centennial of the Declaration of Independence in 1876.

The project was a joint effort between the two countries where the French people were responsible for the Statue and its assembly, while the Americans would build the pedestal on which it would stand. It was built in honor of the centennial of the Declaration of Independence and also as a symbol of the friendship between their peoples. 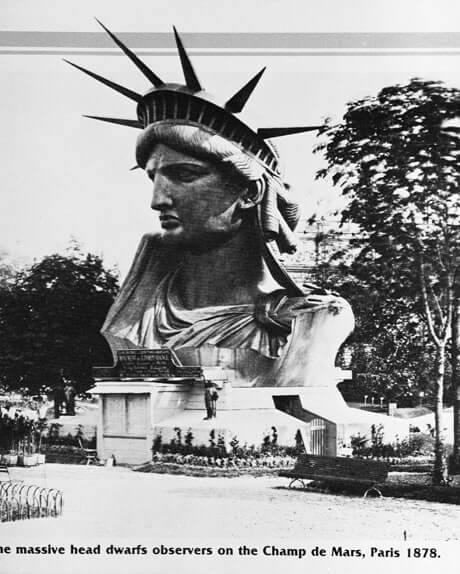 Due to the necessity to raise funds for the statue, work on the sculpture hadn’t begun until 1875. Bartholdi’s massive creation was named “Statue of Liberty Enlightening the World,” and it depicted a woman holding a torch in her right hand which is raised. While the Statue holds a tablet in her left hand, upon which was engraved “July 4, 1776,” which is the adoption date of the Declaration of Independence.

Read Also: What does Statue of liberty represent?

Bartholdi, who was said to have modeled the woman’s face after that of his mother, hammered the large copper sheets to create the statue’s “skin” and used a technique called repousse. Lady Liberty’s skeleton has four huge iron columns that support a metal framework holding the thin copper skin. Bartholdi chose copper as it was attractive, yet durable enough to withstand the long voyage, and virtually impervious to the salt-laden air of the New York Harbor.

To create the skeleton on which the skin of the statue would be assembled, he called on Alexandre-Gustave Eiffel, designer of the Paris’ Eiffel Tower. Along with Eugène-Emmanuel Viollet-le-Duc, Eiffel had built a skeleton out of iron pylon and steel that allowed the copper skin to move independently, a necessary condition for the strong winds it would endure in the chosen location of New York Harbor.

Bartholdi began by creating the Lady Liberty statue’s right arm and torch, and it was exhibited at the Philadelphia’s Centennial Exposition in 1876. Later in 1877, the 42-foot-high sculpture was placed in the Madison Square Park at Madison Avenue and 23rd Street to raise funds for the construction of the Statue of Liberty’s pedestal. The arm and torch remained in the park for about seven years. In France, the completed head and shoulders of the statue of Liberty were publicly displayed to encourage donations. 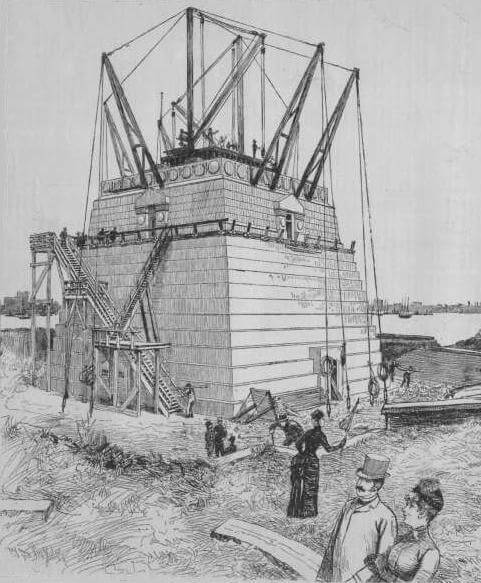 Numerous forms of entertainment and lotteries were among the many methods used in raising money. In the United States, in addition to the right arm and torch being displayed to inspire the generosity, the American Committee for the Statue solicited contributions and used the art and theater benefits, auctions, and prize fights to help fund the project.

While the work for the Statue went on in France on the actual statue, the fundraising efforts had continued in the United States for the pedestal, including contests, benefits, and exhibitions. The leading New York newspaperman Joseph Pulitzer had used his paper, “The World,” to raise the last necessary funds. The American architect Richard Morris Hunt designed, and the statue’s pedestal was constructed inside the courtyard of Fort Wood, which was a fortress built for the War of 1812 and located on Bedloe’s Island, off the southern tip of Manhattan in Upper New York Bay.

In 1885, Bartholdi completed the statue, which was disassembled, packed in over 300 pieces of more than 200 crates, and shipped to New York, arriving that June aboard the French frigate Isere. Joseph Pulitzer tactic worked, and Americans were moved to donate more than $100,000. The financing of the pedestal was finished in August 1885 and construction was completed in April 1886.

Over the next four months, the workers had reassembled the statue and mounted it on the pedestal. The Statue had been placed upon a granite pedestal on the Bedloe’s Island, which was renamed as Liberty Island in 1956. The height of the Statue of Liberty reached 305 feet or 93 meters, including the pedestal. On October 28, 1886, the President Grover Cleveland officially dedicated the Statue of Liberty in front of thousands of spectators.

The Story Behind Albert Einstein’s Death | The Hidden History