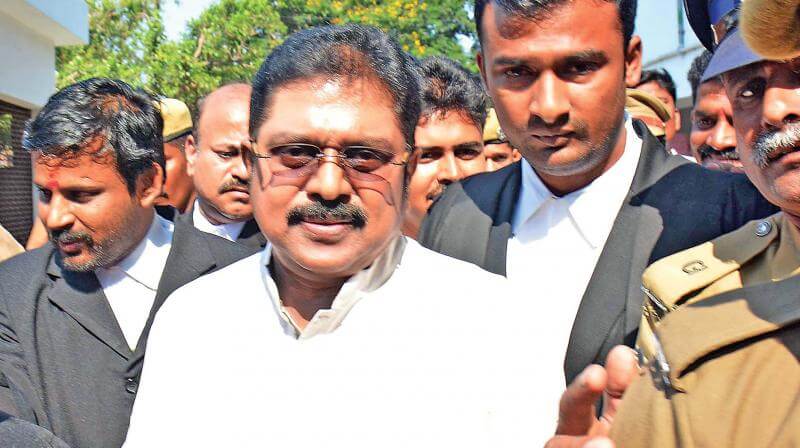 Police officials from Delhi on Wednesday night served summons to the AIADMK deputy general secretary TTV Dhinakaran in a case of alleged bribery of Election Commission (EC) officials for retrieving the party’s ‘Two Leaves’ symbol. It is, however, not known when Dhinakaran has been asked to appear before them. TN ministers had met earlier seeking for merger and expected Palanisamy might approach OPS.

Assistant Commissioner Sanjay and another official had served the summons to Dhinakaran at his upscale Besant Nagar residence in Chennai. The Delhi Police personnel, who were inside the house of Dhinakaran for about 20 minutes, declined to speak to the waiting media while leaving the premises.

Anxiety and tension, meanwhile, prevailed for a while as a party worker tried to set himself intense to show his opposition to the police. The self-immolation bid was thwarted by the other cadres and some plainclothesmen. On Wednesday, the Delhi Police had issued a lookout notice against Dhinakaran. The lookout notice was issued in the wake of inputs that Dhinakaran was an NRI and could try to flee the country, the police said.

The Delhi Police personnel, who were inside the house of Dhinakaran for about 20 minutes, declined to speak to the waiting media while leaving the premises

The AIADMK (Amma) Deputy General Secretary has already faced the heat as the K Palanisamy Cabinet revolted against him last night and decided to keep him and his family out of the party and the government. On Thursday, Dhinakaran virtually questioned the need for the lookout notice, saying how could he flee the country when his passport was “in court” for 20 years named Sukesh Chandrashekhar in connection with the matter.

He also claimed that he had told Dhinakaran that he would get a favorable verdict from the Election Commission of India in the party symbol case, he said. The 27-year-old had said Dhinakaran that he has contacts in the Election Commission and his contacts will help the Sasikala faction get the AIADMK’s poll symbol of two leaves in a by-boll to the R K Nagar Assembly seat in Tamil Nadu.

Police got on Chadrashekhar’s trail after they had received a tip-off from an informer about one Election Commission officials being approached. It has been learned that he had struck a deal for Rs 50 crore for helping the AIADMK faction to keep the ‘two leaves’ symbol.

The middleman had allegedly got Rs 10 crore of the deal amount till now, and the remaining amount was to be given to him in a time-bound manner. He had allegedly received money from some Chandni Chowk-based hawala operators and police is probing the hawala link. Yesterday, Sukesh was taken to Chandni Chowk by the Crime Branch officers to identify the hawala operators.

Dhinakaran had, soon after the arrest of Sukesh Chandrasekhar asserted that he would face the matter legally. He had denied any knowledge of Chandrasekhar.