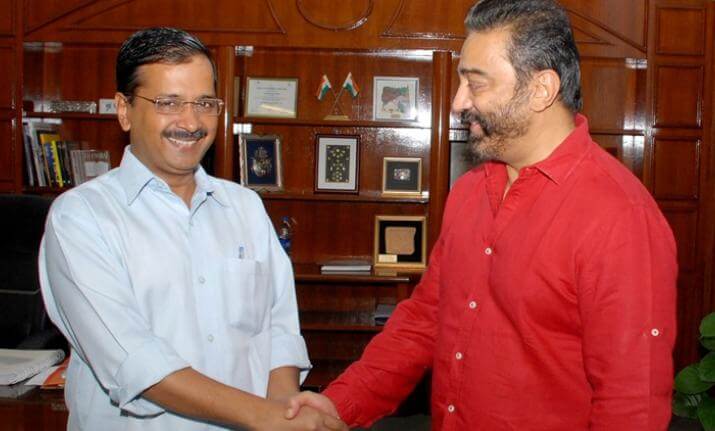 Today, The Chief Minister of Delhi and Aam Aadmi party’s chief national convener Arvind Kejriwal will reportedly be meeting actor Kamal Haasan in Chennai. AAP sources said that actor Kamal Hassan has been showing interest in entering political life and it shows that Kejriwal is exploring the possibility of taking his party down south, too. The timing of the meeting is important, and speculation is rife due to the suspense surrounding Mr Haasan’s plans to enter politics and the impact such a move would have on the political scenario in Tamil Nadu and beyond. Also, Kamal had recently met Kerala Chief Minister Pinarayi Vijayan to discuss the political life. Arvind Kejriwal To Meet Kamal Haasan makes a current party blink that what is going to happen.

Since July, The Edappadi K Palaniswami government has mostly been at the receiving end of the Kamal Hassan’s tweets; it is seen that many of tweets from July were filled with political messages. It started with an 11-line mystery-rhyme where Kamal used the Tamil word “Mudhalvar”. He tweets in a Tamil word like

“If I decide, I am mudhalvar,”

Kamal Haasan remained brave. On Independence Day, he took on the chief minister. “In spite of several acts of crime and corruption,” he tweeted again in Tamil, “why has no one sought the CM’s resignation.”