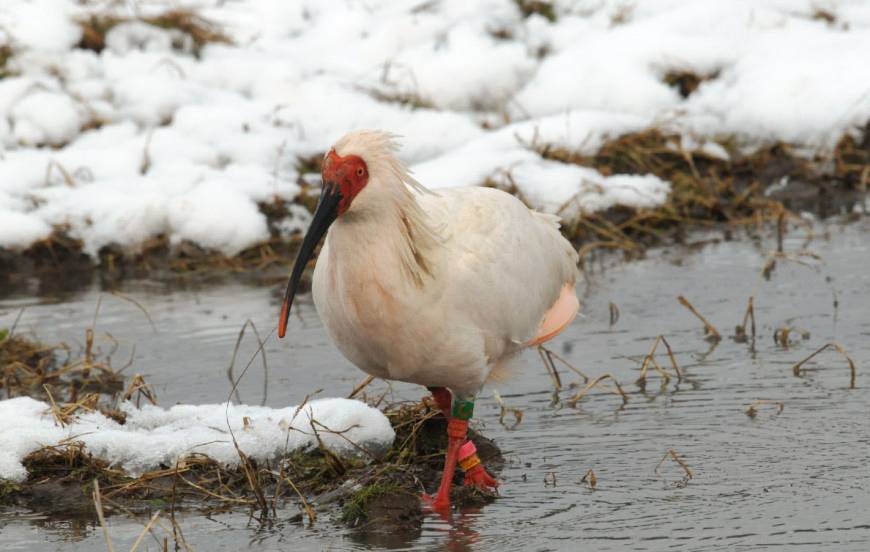 Crested Ibis bird is also called as Japanese crested ibis or Toki. The scientific name of this bird was Nipponia Nippon. These species comes under the order of Pelecaniformes from the Threskiornithidae family. It is one of the rarest species of all ibises which is in the edge of extinction. These birds live in the areas like salt marshes, swamps, near lakes and rivers, tropical mangroves, forests and marshy mountain meadows. These birds grow up to 56 cm long and 0.6 to 0.4 pounds of weight. Crested Ibis (Nipponia Nippon) looks like white-plumaged ibis that lives in the pine forests. The head of this bird is partially covered with red coloured skin and it has a dense white crest on the nape. Moreover, it is the only species which comes under the genus Nipponia. In initial days, these birds were widely spread over Japan, China, Korea, Taiwan and Russia. According to recent reports, the population of Nipponia Nippon birds were gone down and it comes under the category of an endangered bird.

There are totally 28 extant species and 6 extinct species of ibis found around the world. Most of the species live in the southern hemisphere.

Crested Ibis has a deep relationship with Japanese history and culture. In olden days, Japanese called this bird as peach-flower bird and used for various purposes. But now these birds are trying hard to survive with water pollution, pesticides, uncontrolled hunt and habitat destruction. In the list of endangered and critically endangered species, Crested Ibis and Northern bald ibis were present.

As it is a rare species, the cost of this bird has not mentioned yet now.