Aswini Murder Case: According to reports, a teenage girl name Aswini, a resident of Maduravoyal was stabbed outside Meenakshi College in KK Nagar on Friday. The attacker has been caught and handed over to the police. Aswini who was pursuing B.Com first year at Meenakshi College Of Engineering was attacked by the mineral water businessman. Although Aswini was rushed to the nearby hospital, doctors declared that she was brought dead. Her body is likely to be shifted to a government hospital for post-mortem.

The attacker has been identified as Alagesan, who is associated with a mineral water business. The public caught hold of him on the spot, thrashed and then handed over to the police. An investigation is underway.

According to The Times of India report, Aswini and Alagesan got married on 16 February 2018. The daily reported that the couple had some differences after the marriage and they had even filed a complaint at the Maduravoyal police station. However, police filed a community service register (CSR) and let the couple go after getting a statement. 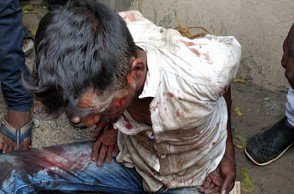 The BJP national secretary H Raja took it to Twitter to condemn the murder of a young woman Aswini in broad daylight.