Chakravarthy Ashokar a historical drama series that aired on Colors Tamil TV from 24 February 2018. The lead roles of the Chakravarthy Ashokar Tamil Serial are Mohit Raina as Ashok and Pallavi Subhash as Dharma/Shubhadrangi. The Chakravarthy Ashokar is aired every Monday to Friday at 12:30 (IST). The story based on the life of the Indian Emperor of the Maurya Dynasty, Ashoka. This serial showcases the power struggles of this era. This show was originally created and written by author and screenwriter Ashok Banker. Check out below for Chakravarthy Ashokar Serial Episodes, Cast & Crew, and More. 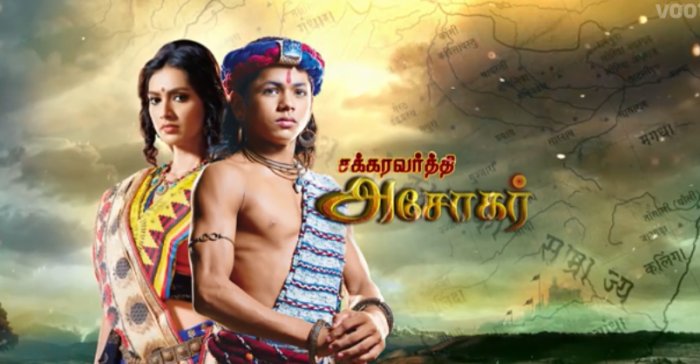 The serial portrays the life and love story of Ashoka’s parents Dharma and Bindusara. Bindusara is the present king of Magadh, while his step-mother plans against him. Bindusara was attacked by Helena’s men but rescued by a beautiful and bold Brahmin girl named Subhadrangi/Dharma. Impressed by her skills, Bindusara falls in love and marries her.

Later, Dharma becomes pregnant. The serial ends when one of Bindusara’s other wives Noor and her father Mir Khorasan try to kill Subhadrangi/Dharma. Subhadrangi gives birth to a baby boy and names him as “Ashoka“.

Chakravarthy Ashokar is an original series in Hindi named as Chakravartin Ashoka Samrat in Colors TV.