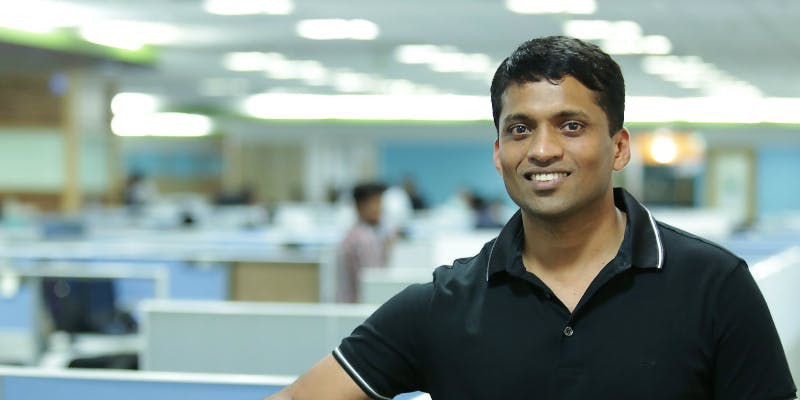 Byju Raveendran is an entrepreneur who is the founder of Byju’s Classes, the Education Technology firm. He launched the app for school students in 2015 with the tagline “Fall in love with learning”. Check Byju Raveendran Wiki, Biography, Age, Career, Family, Images, and More.

Raveendran was born and brought up in Azhikode, Kannur District, Kerala. He studied at Malayalam medium school where both his parents were teachers. His father taught Physics and his mother Shobhanavalli taught Mathematics. He has completed Bachelor’s degree in Mechanical Engineering from Government Engineering College, Kannur.

He was very interested in sports and played six different sports including football, cricket, table tennis, badminton, at the university level. After graduation, he started working as a working engineer in an IT company for few months in Bangalore. While working, he cracked CAT twice with 100 percent. He was also approached by IIMs. During a vacation, he helped few friends to study for the CAT exam.

He got a lot of positive feedback and heard of the good results of the people he had coached. Later, he quit his IT job and derived the idea of starting the business to his friends. He then started up an educational technology app that is an entirely new segment in the Indian market. Soon, he became a perfect businessman and a tremendous salesman as he managed to get funding from Facebook, IFC etc. KISS (keep it simple stupid) is Byju Raveendran’s mantra. A black polo and basic denim is his uniform.

He stated that the philosophy of BYJU’s is to inspire a lifelong love of learning. Now, BYJU’s has become India’s largest Education Technology (Learning) company. The learning app has phenomenal engagement, with over 3.5 million students on its platform. His Learning App makes use of original content, pure animations, watch and learn videos, and interactive simulations. Not only theoretical, but the app also makes learning contextual and visual.

Byju learning app is now looking to expand its technology to the US, UK, South Africa, and Commonwealth markets. It is already present in the Middle East.

On 25 July 2019, The Board of Control for Cricket in India (BCCI) announced Byju, which is owned by Think and Learn Private Limited, has replaced Oppo India as the official Team India sponsor. Also, they revealed the deal period that will begin from 5 September 2019 until 31 March 2022.

Byju Raveendran said: “We are proud to be the Indian Cricket Team sponsor. Cricket is the heartbeat of all Indians and we are thrilled to be an integral part of our much-loved team. As a learning company, Byju’s has always recognised the critical role that sport plays in a child’s development. Just as cricket inspires a billion budding dreams across India, we too as a learning company hope to inspire the love of learning in every child’s heart.”