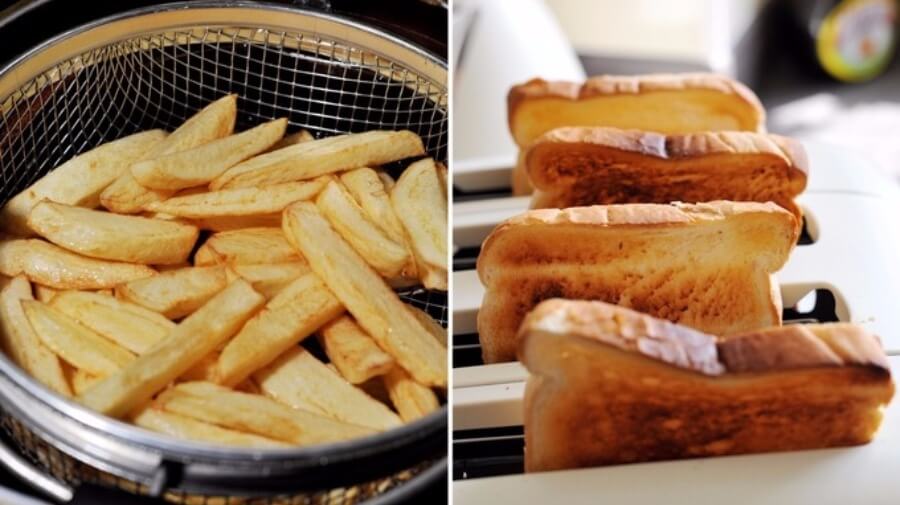 Bread toasts and crunchy potato chips lovers have no choice and would probably give it a miss as UK food scientists have warned that roast potatoes and browned toast were a potential cancer risk.

Bread, potatoes, and chips should be cooked until the golden yellow color, rather than brown, such that to reduce the intake of a chemical which could cause cancer, warns the government food scientists.

Acrylamide was a chemical compound and gets produced when the starchy foods were roasted, grilled or fried for too long at higher temperatures above 120ºC. The Food Standards Agency (FSA) of the UK government body has issued a public warning over the risks of acrylamide.

The FSA has also recommended to carefully follow the cooking instructions and avoiding browning of these food items. However, on the other side, the UK’s Cancer Research said that the link was not proven with humans.

The FSA have also mentioned that potatoes and parsnips should not be kept in the refrigerator. Refrigerating at low temperature would raise the sugar levels in the vegetables, potentially which would increase the amount of acrylamide production during cooking.

Acrylamide was present in many different types of food, and it was a natural by-product of the cooking process.

The highest levels of the substance were found in the foods with high starch content which when been cooked above 120ºC, such as bread, crisps, breakfast cereals, cakes, biscuits, crackers and in coffee, as a result of the roasted beans.

During the browning process, the sugar, amino acids and water present in the bread would combine to create a color, acrylamide as well as flavor and aromas.

The Food Standards Agency (FSA) says that it was not clear exactly how much percent the humans could tolerate the acrylamide content, but it does believe that people were eating too much of it.

By the “rule of thumb,” people should aim for the golden yellow color or lighter when frying, baking, roasting or toasting starchy foods.

For example, cook the potatoes, but it should not be “fluffed up” to maximized dark brown crispy bits.They should be roasted to the lightest color which was acceptable. Toast should also be cooked to a light brown color.

Root vegetables like potatoes, sweet potatoes, swede, beetroot, turnip, and parsnips also carry a high level of the compound once when they have been roasted or fried until darker brown color or crispy layer. Even the high temperatures and long cooking times could also increase the levels of acrylamide further.

Foods items like crisps and skinny fries appear to have the highest level of acrylamide content. Acrylamide gets formed due to the chemical reaction taking place between an amino acid (asparagine) and certain sugars in the food.

However, steaming, boiling, and microwaving appear to have far less cause of the reaction. Studies in mice have also shown that high levels of acrylamide could even cause neurological damage and also cancer.

While studies on humans have proved the inconclusive result, the experts believe that the compound has got the ability to cause cancer in humans.

As a part of a new campaign, FSA advising people to make small changes to the way they cook and prepare their food that includes the following.

Steve Wearne, the FSA policy director said that the manufacturers had already taken steps to cut down acrylamide levels of acrylamide in foods, but it was also the time for the consumers to be made more aware of the cancer risks. He has also said that the studies showed babies, children and the adults in the UK consumed too much of acrylamide food.

He has added that they were not saying people should worry about the occasional meal but it was about managing the risk over a lifetime. “Anything you could do to reduce your exposure would reduce your lifetime risk,” he mentioned.

Related Topics:CancerCrunchy Potatoes
Up Next