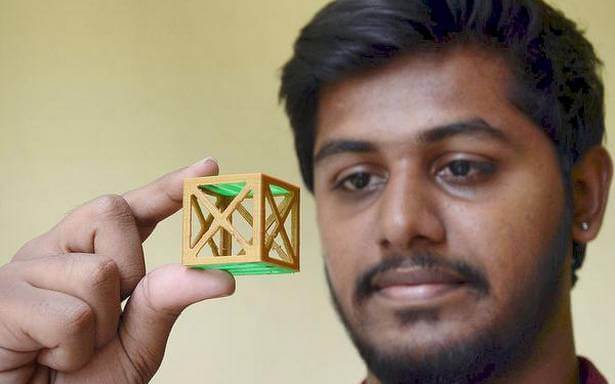 A boy from Tirupati named K. Yagna Sai’s had launched a Kalam Satellite. His childhood ambition was to become a pilot, but his confidence helped him in designing a satellite and sending it to space.

On June 22, NASA had launched at Wallops which researched by Sai. He was part of the six-member team from Chennai-based Space Kidz India that helped him to design KALAM satellite. Sai doing his A B. Tech final year at Hindustan University, Chennai and he were the ‘Lead Technician’ in the team that invented the satellite termed as world’s lightest which is weighing a mere 64 gm and the first 3D-printed.

‘KALAM Sat’, a femto category satellite called after former President A.P.J. Abdul Kalam is the only one from India among the 86,000 entries obtained from over the world, for a trial conducted by IDOODLE and Colorado Space Grand Consortium, in partnership with NASA.

Reinforced carbon fibre polymer made as 3.8 cm cube satellite, and it was the satellite were sent with the 70 cubes sent by the NASA rocket. To examine more in space, the other entries are sent, like chewing gum, say blood,etc.,

Sai told about the satellite that the result are yet to reach them,

The satellite contained a temperature and humidity sensor, a barometric pressure sensor and a ‘Nano Geiger-Muller counter’ to measure radiation in the outer space. “Our satellite collected these details in a 12-minute period during its four-hour mission,”

Sai credited his success to the efforts of Ms Kesan and the support of his parents K. Ramu and K. Vani. His aim is not only keen on developing ‘Space Kidz India’  and also he also needs to examine deep into space science for higher research.