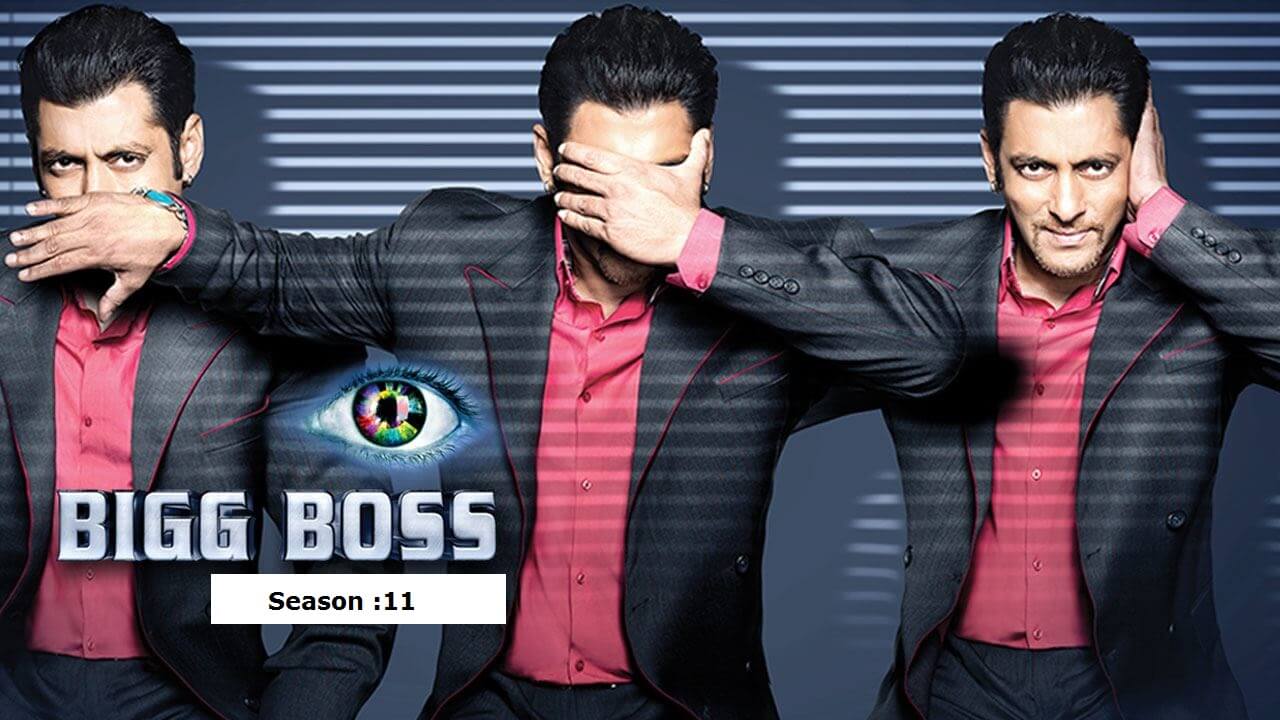 Bigg Boss is one of the most viewed popular show in India. Bigg Boss is the India’s hottest reality show that going to be broadcast on Colors channel. Endemol in the Netherlands had first developed this game show as international series titled “Big Brother,” and within a span of 11 years of the telecast, Bigg Boss has successfully rolled out 10 Seasons and one spin-off version thus establishing itself as one of the most popular Reality TV Series in India. Bigg Boss Hindi Season 1 was started in 2006, and it happily enters into Bigg Boss season 11 on October 1, 2017. Following the pattern of the last season, Bigg Boss 11 has some celebrities, and one common man who is not a celebrity will be participating in the show. Bigg Boss 11 Contestants are not confirmed still, and the audition process is going on.

Salman Khan is hosting this show from the sixth season in 2012. Bigg Boss has been quite controversial throughout its 10 season because of its participant’s arguments, fights, and plotting during their stay in the isolated Bigg Boss house. The Bigg Boss season 10 ended, and the final winner is Manveer Gurjar who is a well-deserved candidate. Manveer is the first common contestant who has won the Bigg Boss show.

Nia Sharma is an Indian television actress and played the role of Manvi in the soap opera Ek Hazaaron Mein Meri Behna Hai and got an immense appreciation. She played the female lead in soap opera Jamai Raja as Roshni. She was eliminated but got a re-entry in Fear Factor: Khatron Ke Khiladi. She grabbed the third sexiest Asian woman for most daring outfits in the Top 50 Sexiest Asian Women List by Eastern Eye. She is currently seen in Comedy Nights Bachao Season 2. And now she is ready to take part in Bigg Boss 11 show as a contestant.

Navpret Banga is a YouTube Star who is widely known for her BrownGirlLifts YouTube channel. Indian fitness and health vlogger is the concept of her channel. She has gained popularity with her tutorials and tips for fitness and healthy living vlogs. She might be a part of Bigg Boss Season 11 reality show.

Sana Saeed is an Indian actress and model who acted in Bollywood films. She made her debut as child artist in Kuch Kuch Hota Hai and also appeared in television shows like Babul Ka Aangann Chootey Na and Lo Ho Gayi Pooja Iss Ghar Ki. Sana Saheed made her screen debut in 2012 as an adult in a supporting role in Karan Johar’s commercial film Student Of The Year, which emerged a box-office success. And now she was selected as a contestant in Bigg Boss 11 which would be a next big path in her life.

Dhinchak Pooja aka Pooja Jain is an Indian YouTube Star, who lives in New Delhi, India. Three of her numbers Swag Wali Topi, Daaru, Selfie Maine Leli Aaj have received more than a million hits, and Dilon Ka Shooter had received 8,00,000 hits by the first week of July 2017. Her video Selfi Maine Leli Aaj was uploaded in May 2017 and had received over 23 million hits, by the end of July. She might be a part of reality TV show Bigg Boss season 11.

Achint Kaur is an Indian television actress who comes from a Sikhism background and is best known for playing the antagonists Mandira and Pallavi in Ekta Kapoor’s Indian soap operas Kyunki Saas Bhi Kabhi Bahu Thi and Kahaani Ghar Ghar Kii, respectively, on Star Plus Television. Now she is acting as a mother and a mother-in-law in the serial titled “Jamai Raja”. And now she was selected as a contestant in Bigg Boss Season 11.

Devoleena Bhattacharjee is a Television actress and a Bharatanatyam dancer. She gained popularity with the role of Gopi Modi in Saath Nibhaana Saathiya on Star Plus channel. She is one of the highest funded actors on Indian television. She will be seen as one of the celebrity contestants of the Bigg Boss show.

Ayaz Khan is an actor who Known for his role in ‘Jaane Tu Ya Jaane Na,’ Ayaz Khan reported that he doesn’t even know when the show is starting. He told in interview that

“I don’t know where this rumor is coming from. I have not got any calls from the makers. In fact, I don’t even know when it is starting this year,”.

Riya Sen is an Indian film actress and model. She comes from a family of actors including her grandmother Suchitra Sen, mother Moon Moon Sen and sister Raima Sen. She starts her acting career in 1991 as a child actress in the film Vishkanya. And now she will be seen as one of the celebrity contestants of the Bigg Boss show.

Nandish Singh is an Indian television actor and model. He started his career with modeling after he made his television career in Kasturi as Raunak. His big break was in Uttaran as Veer Singh Bundela and later seen in Phir Subah Hogi as Aditya. And now he is expected as one of the celebrity contestants of the Bigg Boss Season 11.

Zoya Afroz is an Indian actress and model who appears in Bollywood films. She was the second runner-up in Femina Miss India 2013 got her first lead role opposite Himesh Reshammiya in The Xpose. She also worked in numerous films, serials, and commercials as a child artist. And now Bigg Boss 11 invited her to participate, and it could be the perfect chance to revive her career.

Navneet Kaur Dhillon is an Indian actress and model, who described India at Miss World 2013. Navneet was the winner of Pond’s 50th edition and crowned as Femina Miss World India 2013 that was held in Mumbai. She will be expected as one of the tentative contestants of the Salman Khan’s reality show.

Mohit Malhotra is an Indian model and actor. He began his career with the reality show Spitsvilla 2 and appeared in Sasural Genda Phool and Mitwa Phool Kamal Ke soon after. And now he was selected as a contestant on the hottest reality show Bigg Boss 11.

Mishti Chakraborty is an Indian film actress who made her Bollywood debut with Subhash Ghai’s film Kaanchi: The Unbreakable and her Tollywood debut with Nithiin-A. Karunakaran film Chinnadana Nee Kosam. And now she will be seen as one of the celebrity contestants of the Bigg Boss 11.

Abhishek Malik is an Indian television actor who won the title Mr. Delhi in 2009, Mr. Pune 2010. Even though Abhishek has shifted base to Mumbai now, his family is still in Delhi, and he played a Delhi boy in his debut show “Chhal – Sheh Aur Maat“. And now Bigg Boss 11 invited him to participate to revive his career.

Poulomi Das is an Indian television actress and model. She currently portrays the role of Baby on Suhani Si Ek Ladki. She will be expected as one of the contestants in Bigg Boss Season 11.

Shilpa Shinde is an Indian television actress. She was acting as Angoori Devi in Bhabhi Ji Ghar Par Hai and also acted in the serials Miss India, Hatim and as Chitra in Sanjeevani. Shinde has acted in two Telugu films such as Dasari Narayana Rao’s Chhina and Suresh Verma’s Shivani. And now she is expected as tentative contestants of the Bigg Boss Season 11.

Niti Taylor is an Indian television actress who made her television debut with the serial Pyaar Ka Bandhan in 2009. And now she was selected as a contestant in Bigg Boss Season 11.

Abrar Zahoor is an Indian actor and Model who started his acting career in the film Neerja as the negative lead. He might be a part of India’s hottest reality show Bigg Boss Season 11.

Pearl V Puri is an Indian Model and Actor, who is well known in Indian Television Industry. He played Abeer Malhotra in the show Phir Bhi Na Maane…Badtameez Dil and in Satyendra Sharma Meri Saasu Maa. He will be seen as one of the celebrity contestants of the Bigg Boss Season 11.

The approved list of Bigg Boss 11 contestants will be updated with photos and complete details here after the official confirmation. Click here for Latest News