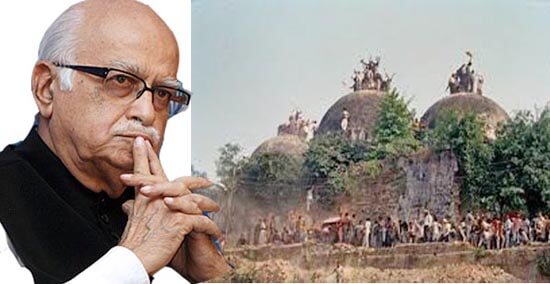 On Wednesday, the Supreme Court has adjourned a CBI plea challenging a trial court’s decision to drop the criminal conspiracy charges against several BJP and other Hindu right-wing leaders in the Babri mosque demolition case. Justice PC Ghose said that the matter would be heard on Thursday as justice RF Nariman, who was with him during the last hearing of the case, has not been the part of the bench on Wednesday.

Justice Ghose also declined to adjourn the hearing for four weeks as per the request by BJP patriarch LK Advani’s counsel, senior advocate KK Venugopal. Advani was one among the 13 leaders exonerated by the trial court. “You want me to retire first,” the judge said in a lighter vein when Venugopal made the request. Justice Ghose is due to retire coming May.

The bench had expressed anguish over the trial court for dropping the conspiracy charges against the 13 leaders on the technical grounds on March 6th as they had been hinted at reviving the conspiracy charges. The exclusion of Justice Nariman’s from the bench for Wednesday’s hearing had raised eyebrows among the lawyers representing an individual who too has challenged the discharge of the senior BJP leaders.

On Wednesday, the Supreme Court has adjourned a CBI plea challenging a trial court’s decision to drop the criminal conspiracy charges against several BJP and other Hindu right-wing leaders in the Babri mosque demolition case

The hearing was to be held a day after a separate bench of the top court has called for an amicable settlement to the decades-old dispute over the religious site in Ayodhya, saying the “sensitive and sentimental matter” is best settled out of the court. JS Khehar, the Chief Justice has even offered to mediate such out-of-court negotiations as the latest push from the courts in resolving a dispute over a 2.7-acre land as it remains India’s most potent communal flashpoint between several Hindus and Muslims.

The issue has returned to the limelight after the BJP grabbed power in UP with a brute majority, reviving hopes among its supporters over the party’s proposed projects to build a Ram temple at the place. Many Hindus believe Lord Ram was born at the same spot where the first Mughal King Babar had to build the mosque. The Babri mosque was demolished on December 6, 1992, by kar sevaks (volunteers) of the Vishwa Hindu Parishad (VHP), sparking communal riots across the country as it left more than 3,000 people dead.

The CBI has booked many BJP leaders including LK Advani, Uma Bharti, Murli Manohar Joshi, and Kalyan Singh but the Allahabad high court later discharged them. Justice Nariman was outspoken in his criticism of the trial court’s decision, and he said at the commencement of the proceedings as people cannot be discharged.

The bench had remarked that there is something very peculiar going on in this case. We prima facie doesn’t approve of the way these people have been discharged. The criminal cases in the Babri Masjid case stemmed from two crime files, 197 and 198. Both were filed quickly after the disputed structure got demolished. However, the CBI has filed a combined charge sheet in the case.

FIR number 197 was registered against lakhs of unknown kar sevaks and dealt with the actual demolition of the structure. The accused were charged with serious offences including robbery or dacoity with the attempt to murder and promoting enmity between different religious groups. A Lucknow court was hearing the case, which dropped the conspiracy charges against those 13 leaders.

The second, FIR 198, was registered against 12 persons, including Ashok Singhal, Advani, Giriraj Kishore, Murli Manohar Joshi, Vishnu Hari Dalmiya, Uma Bharti, Vinay Katiyar, and Sadhvi Ritambhara who were present at the Ayodhya when the masjid was being demolished. They were accused of promoting the enmity, making imputations and assertions prejudicial to the national integration and statements conducing to the public mischief. The case is also pending before a court in Rae Barelli.