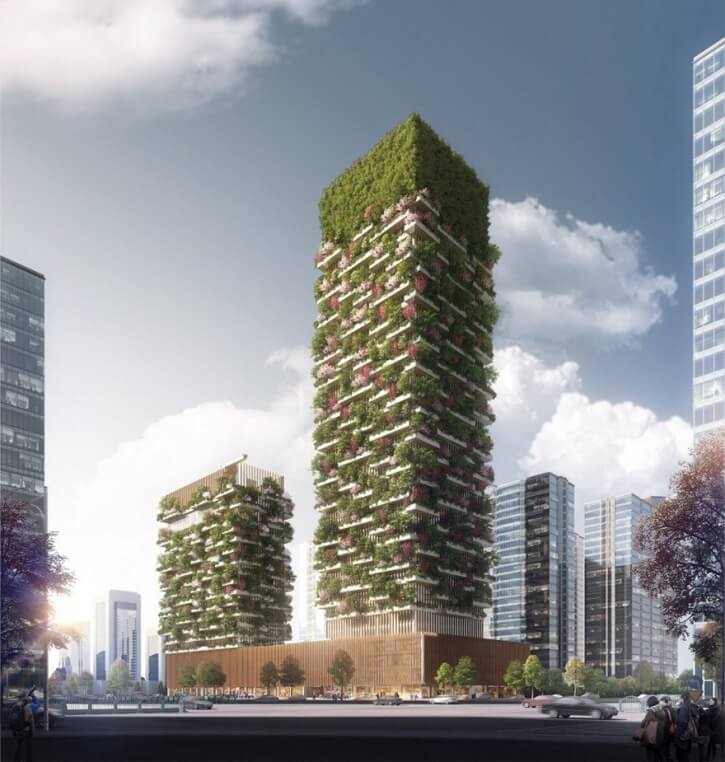 Imagine breathing oxygen that would be 3,000 times purer than what we inhale today. Well, that dream would soon come into existence in China. Asia’s first vertical forest, the project named ‘Nanjing Towers‘ with two living towers that are already under construction in Nanjing, China. The Nanjing Towers would bring over 3,000 plants which comprise of 1,000 trees and nearly 2,500 cascading shrubs and plants from 23 different local species that would cover a 6000-square-metre area. Estimated that the new Nanjing Towers would produce 60 kg oxygen every single day.

Asia’s First Vertical Forest comprises of two towers that would stand at heights of 656 feet and 354 feet.

The towers would be designed by an Italian architect, Stefano Boeri who has completed his greenery-filled “Bosco Verticale” residential towers in Milan, in Italy in 2014. Stefano Boeri has now announced that a similar design would be developed on the other side of the world, in China. The state-owned National Investment Group Co.Ltd, Nanjing Yang Zi is promoting the “Nanjing Vertical Forest, ” and it would be the first of its kind in Asia.

The two towers in China would be built in the highly populated Pukou District of the city and would be 656 feet and 354 feet tall. Stefano Boeri’s proposal would see the construction of two towers characterized by interchanging of green tanks and balconies, similar to the prototype established in Milan that would help to regenerate the local biodiversity.

The taller of the two towers would rise with 200 meters in height and would be crowned at the top by a ‘green lantern.’ The tower would host offices from 8th to 35 floors and would include a museum, a green architecture school along with a private rooftop club. Meanwhile, the second tower would house a Hyatt hotel with 247 rooms of different sizes along with a rooftop swimming pool and an array of commercial, recreational, and educational facilities.

The Nanjing Green Towers, which were slated for completion in 2018 and would offer a fantastic view from balconies along with setting up a high benchmark for enriching the biodiversity. When completed, the towers would rise 107m and 199m above Nanjing’s Pukou district. The effort is a great symbol of giving something back to the environment from China, which features among the world’s most polluted countries and now would get a breath of fresh air. The project was expected to lessen the impact of pollution in the city by absorbing 25 tons of CO2 in a year and providing 60kg of oxygen a day. Nanjing was one of the China’s cities that suffers from air pollution.

The build is the third prototype, following the vertical forests that have been already created in Milan and Lausanne. The Milan towers were initiated in November 2014 in the Porto Nuova Isola area as part of a large-scale renovation project led by Hines Italia. The design consists of two towers which receive 480 large and medium trees, 300 small trees, 11,000 perennial and covering plants along with 5000 shrubs. A similar vertical forest with 36 stories has been planned for Lausanne, Switzerland by the same architect.

The design creates an exceptional environment inhabited by birds and insects, promoting the natural re-population of flora and fauna in a city space. Boeri’s website mentioned that the two green towers in China would be Asia’s first vertical forest and third in the world next to those in Milan city in Italy, and Lausanne in Switzerland.

In addition to the Nanjing Green Towers, Stefano Boeri said that he was also working on many urban forestation projects in other Chinese cities like Liuzhou, Shijiazhuang, Guizhou, Chongqing, and Shanghai. China has declared a “war on pollution” in 2014, but the government still faces some significant difficulties after decades of breakneck economic growth, much of it based on the coal-burning power sector and other heavy industry.

The central government has also promised to make greater use of police and law courts to prosecute companies and local officials responsible for surpassing emissions limits. In the world where high-rise buildings were reaching for the skies, little effort in making them eco-friendly could go a long, long way.