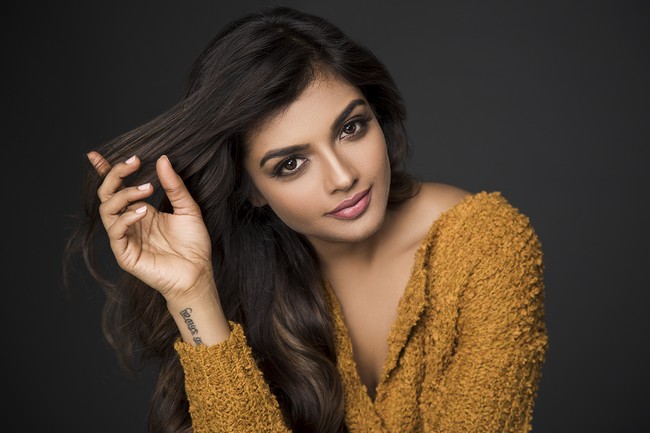 Ashna Zaveri is an Indian Actress, Model and Fashion Stylist. She mainly works in Tamil and Telugu Film Industry. She made her on-screen debut with leading comedian turned actor Santhanam in the film Vallavanukku Pullum Aayudham. The film earned her positive reviews and receives critics acclaim. She was a fashion-stylist who endorsed many brands and appeared in commercials like PowerShot with Anushka Sharma, Shaadi.com, Addiction Deo, Indulekha Care. Ashna Zaveri has worked in several films and last seen as Manisha on 2017 film Brahma com. Check out below for Ashna Zaveri Wiki, Biography, Age, Weight, Husband, Movies, Images and More.

Ashna Zaveri was born on 1 January 1992 in Mumbai, Maharashtra, India. She did her schooling at Vissanji Academy, Mumbai. Later, She was graduated in Commerce & Economics from Jai Hind College and Narsee Monjee College of Mumbai. Her personal details are not known as she is new to the film industry. Her personal details will be updated soon. In 2014, Ashna made her on-screen debut in the film Vallavanukku Pullum Aayudham.

The film earned her positive reviews and receives critics acclaim. Before she enters in to film industry, Ashna was a fashion-stylist appeared in commercials like PowerShot with Anushka Sharma, Shaadi.com, Addiction Deo, Indulekha Care. In 2015, She again offered an opportunity to work with the comedian turned actor Santhanam in the film Inimey Ippadithan. Later, she came familiar with the Tamil film industry and acted in films like Meen Kuzhambum Mann Paanaiyum, Brahma.com. And she is now playing the heroine in Nagesh Thiraiarangam and Titanic.