Angelique Kerber Rallies To Reach 4th Round At Indian Wells, Halep Bows Out

Angelique Kerber has displayed her grit and vaunted the fitness as she battled back to beat France’s Pauline Parmentier with 7-5, 3-6, 7-5 in scorching heat on Monday to reach the fourth round of the BNP Paribas Open. Kerber has joined in the round of 16 by Venus Williams. The 36-year-old American, who was forced to saved three match points in her opening victory, faced no such drama on Monday with a 6-4 6-2 win over Lucie Safarova of the Czech Republic.

Kerber, who will reclaim the world number one ranking next week, won the first set by taking the last three games after facing set point and was a point from trailing 5-2 in the third set before surging to victory. She sais as quoted “It was a tough and a high-level match from both of us,” the second-seeded German said on court after her two hours, 33-minute victory. “Pauline has played unbelievably from the first ball, and we both battled until the end. 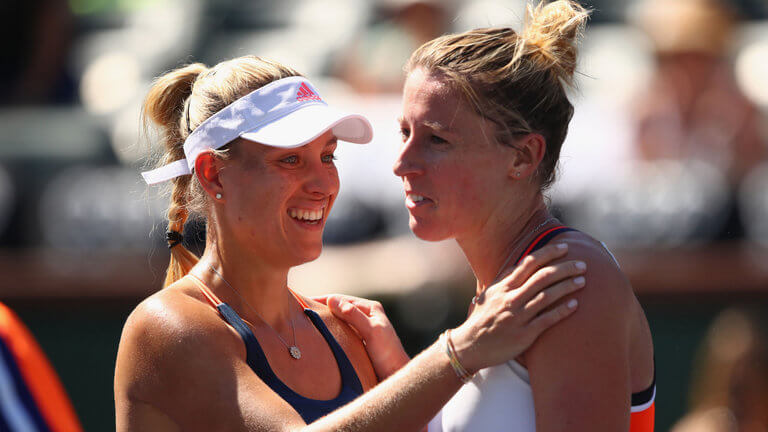 Angelique Kerber second seed put on a determined display to rally past France’s Pauline Parmentier 7-5 3-6 7-5 in the scorching desert heat to reach the fourth round of the BNP Paribas Open on Monday.

Kerber persevered despite Parmentier saving 13 break points in the match. “She is a tricky opponent,” said the German. “She has played a lot of spins, in particular on the forehand side. “I’d had great practices in the last few months, so I’m ready to stay on the court for three hours,” she added.

Next up for Kerber would be 14th-seeded Russian Elena Vesnina, who recovered from a bout with the dizziness to beat 25th seed Timea Babos of Hungary 6-4 1-6 6-4. Fourth seed Simona Halep met a different fate against her French opponent, as 28th seed Kristina Mladenovic registered a 6-3 6-3 win to reach the fourth round.

Mladenovic, riding a positive wave after notching her first Women’s Tennis Association (WTA) title at St. Petersburg and reaching another final at the Abierto Mexicano Telcel, maintained her form against a rusty Halep. The Romanian, playing her first event in five weeks due to a knee injury, fell in one hour 42 minutes.

Williams has saved three match points in her opening match, but the 12th seed faced has no such drama in her 6-4 6-2 victory over the Czech Republican, Lucie Safarova. Next up for the 36-year-old American would be Chinese qualifier Peng, who has eliminated Poland’s Radwanska with 6-4 6-4.

Peng, working to regain form since undergoing the back surgery in 2015, knows that she is capable of holding her own against the top seeds, having twice beaten by Radwanska at the U.S. Open and defeated Williams at last year’s China Open. She said in an on-court interview as quoted “I’m really happy that I can come back and play this tournament again after my back surgery I almost ended my career. But I had spent a lot of time and fought hard to be here.”