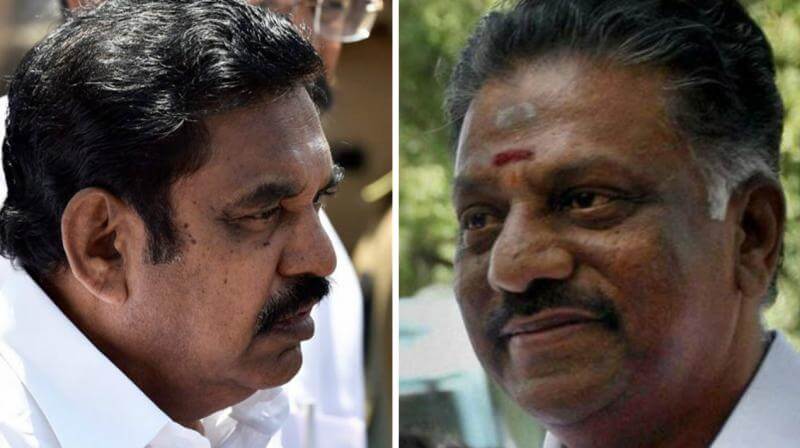 The two factions of the AIADMK have reportedly finalized the merger deal, with O.Panneerselvam returning as the CM of Tamil Nadu. The current CM E.K.Palaniswami would replace V.K.Sasikala as the party’s general secretary. According to the report in The Indian Express, the ruling AIADMK faction has sealed the deal due to “vulnerable state of the government.” The merger is likely to be announced on Monday. Recently, the Delhi cops swoop downed on Dhinakaran home and issued summons In the Bribery Case.

“The merger deal has been sealed, and the formal talks will begin now between the senior leaders of both factions to finalize and announce the decision. Palaniswami would be stepping down for Panneerselvam, and become the party’s chief. Health Minister C.Vijayabaskar, whose properties were already raided by Income Tax officials, might be dropped from the cabinet. Former minister and the MLA Senthil Balaji might be inducted along with one or two more faces from the southern Tamil Nadu,” a senior AIADMK leader mentioned the newspaper.

Meanwhile, other leaders in the ruling faction have started to distance themselves from Sasikala and her nephew T.T.V.Dinakaran. The discussions for the merger of the two factions had begun after Dhinakaran had been booked for allegedly offering a bribe to an Election Commission official in an attempt to get the party’s poll symbol of ‘two leaves’ in a by-election to the R.K.Nagar Assembly seat in Tamil Nadu.

Both the factions of the AIADMK had on Friday formed committees to discuss the merger. Panneerselvam’s panel, headed by former AIADMK minister K.P.Munuswamy, includes senior leaders Mafia Pandiarajan and V.Maitreyan. Palanisamy has also formed a seven-member committee, which will be led by Rajya Sabha MP R Vaithiyalingam, and includes ministers C.Sreenivasan, K.A.Sengottaiyan, and D.Jayakumar among others.

On hardening its stance for the merger talks, the Panneerselvam camp had on Thursday demanded that the faction led by Palanisamy formally expel Sasikala and Dhinakaran, besides about 30 other members of their family from the party. Following the cabinet’s revolt against him earlier this week, Dhinakaran had said he was “stepping aside” in the interest of the party.

On Thursday, a top leader in the Panneerselvam camp, K.P.Munusamy, had also said the first demand was getting the resignation of Sasikala and Dinakaran and later with their formal expulsion. The O.Panneerselvam camp has also sought a CBI probe into the circumstances leading to former CM Jayalalithaa’s death on December 5 last year.