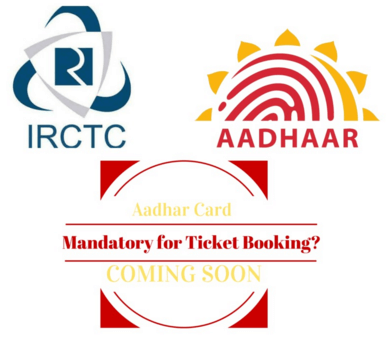 Although, Aadhaar card mandatory could be applied to the passengers only when they apply for some concessions on their tickets. Already booking train tickets for senior citizens, Aadhaar card data is required by the Indian Railways from April 1. As of now, it is optional to provide the card data, but soon it will be mandatory to produce Aadhaar card details.

The plan was detailed by the Indian Railways Minister Suresh Prabhu stated that the organization would ask to do a “transformation of ticketing  by migrating towards paperless ticketing, Aadhaar-based ticketing, cashless, and an integrated ticketing App by May 2017.” In the plan, it is also noted to have 6000 sales machines point and 1000 numbers of Automatic Ticket Vending Machines across the country in 2017-2018.

Aadhaar card number will be required by the passengers for one-time registration at the IRCTC ticketing site, aimed at eliminating touts from registering with fake identities

Earlier in last year December, the Indian Railways had made the supply of Aadhaar card details optional for senior citizens while booking a train ticket. According to Indian Railways, this initiative was proposed to ensure that the ticket concessions reach the right person. This time the supply of Aadhaar card details is mandatory for anyone using the IRCTC website for booking train tickets online, especially for those who seek some concessions during the online train ticket booking.

The reports of PTI says that the Railways is moving towards Aadhaar linked train ticketing system so that it can prevent blocking a bulk of tickets by the touts, curb cases of impersonation, and end fraudulent bookings.

A senior Railways official has said to the news agencies as “Aadhaar card number will be required by the passengers for one-time registration at the IRCTC ticketing site. The step is aimed at eliminating touts from registering with fake identities.” He also added that the Railways is working on software for this purpose. An integrated ticketing app is designed and will be launched soon at the beginning of May to promote cashless transactions in the Railways.

Earlier, the Supreme Court said that Aadhaar card should not be made mandatory for essential and necessary services. However, the government has gradually added the Aadhaar card details to many services claiming that it makes easier to get service. In this plan also the government feels that Aadhaar will make it simpler to implement the concessions. It seems that Aadhaar will be made mandatory for online train tickets booking, which is convenient and also used by millions of people in India.

However, for those who doesn’t have Aadhaar card, the train tickets will not be denied, it is applicable only for online ticket booking. When someone doesn’t have the card, then they will have to stand at a ticketing counter in the queue and spend a couple of hours at the crowded station for buying a ticket.